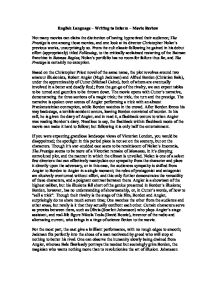 English Language - Writing to Inform - Movie Review Not many movies can claim the distinction of having hypnotized their audience; The Prestige is one among those movies, and one look at its director Christopher Nolan's previous works, unsurprisingly so. From the cult classic following he gained in his debut effort (appropriately) titled Following, to the critically acclaimed restarting of the Batman franchise in Batman Begins, Nolan's portfolio has no room for failure thus far, and The Prestige is certainly no exception. Based on the Christopher Priest novel of the same name, the plot revolves around two amateur illusionists, Robert Angier (Hugh Jackman) and Alfred Borden (Christian Bale), under the apprenticeship of Cutter (Michael Caine), both of whom are eventually involved in a better and deadly feud; from the get-go of the rivalry, we can expect tables to be turned and gauntlets to be thrown down. ...read more.

Nolan is one of a select few directors that can effectively manipulate our sympathy from the character and place it directly upon the adversary, or in this case, the audiences sympathy is shifted from Angier to Borden to Angier in a single moment; the roles of protagonist and antagonist are elusively overturned without effort, and this only further demonstrates the versatility of these characters, and a poignant contrast between them. Angier is a showman of the highest caliber, but his illusions fall short of the genius presented in Borden's illusions; Borden, however, has no understanding of showmanship, or, in Cutter's words, of how to "sell a trick". Though their rivalry is the stage of this film, Borden and Angier, surprisingly do no share much screen time; One watches the other from the audience and other areas, but rarely is it that they actually confront each other. ...read more.

Bowie gives a surprisingly chilling performance as the grim Nikola Tesla. Rebecca Hall, the supporting actress playing Borden's wife, gives a powerful performance, and this movie is sure to be the first rung in her ladder to a healthy career. The movie discusses themes that are more than valid and applicable in today's society : the nature of greed and it's ease of possessing any human being, and how obsession is a "young man's game", as quoted by Cutter. The die-hard skeptic might well not enjoy the movie; some might not be comfortable with the sudden infusion of other genres in the film, but for those whom this is not a problem, a masterpiece in cinema awaits you. All in all, the brilliant performances of the cast and the slick execution of events should be more than enough to pull you through the tri-timeline plot which is, in itself a magic trick to be observed closely; and those that do are well rewarded with a dazzling, well-executed film experience. ...read more.