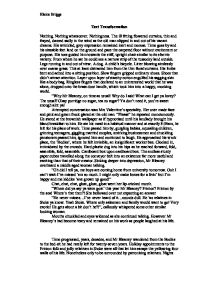 Text Transformation Nothing. Nothing whatsoever. Nothingness. The ill fitting flowered curtains, thin and frayed, danced sadly in the wind as the old man slipped in and out of his vacant dreams. His wrinkled, grey expression remained inert and morose. Time goes by and his sizeable feet land on the ground and pace the carpeted floor without excitement or purpose. His toes guided him towards the stiff, upright chair similar to its electric variety. From where he sat he could see a narrow strip of the tussocky land outside. Legs running in and out of view. A dog. A child's bicycle. Litter blowing aimlessly over coarse grass. This at least distracted him from the thin floral curtains. His limbs bent and ached into a sitting position. Slow fingers gripped ordinary shoes. Shoes that didn't attract attention. Layer upon layer of starchy cotton engulfed his sagging skin like a body bag. Ringless fingers that declared to an uninterested world that he was alone, dropped onto the brass door handle, which took him into a happy, mocking world. "Why Mr Bleaney, on time as usual! Why do I ask! What can I get ya lovey? The usual? Okay porridge no sugar, tea no sugar? Ya don't need it, you're sweet enough aint ya! Attempted conversation was Mrs Valentine's speciality. Her over made face and pink and green frock glared at the old man. "Please" he repeated monotonously. He stared at the brownish wallpaper as if hypnotised until his landlady brought his bland breakfast to him. ...read more.

He watched the young go-getter obnoxiously plod around the factory floor without remorse. Later that afternoon, the broken old man took an unusual detour through the raw crowded streets of Hull's city centre. Cheap Vegas-like illuminations filled him with nostalgia. In his youth he had gambled and had won and lost a small fortune by plugging at the four aways and spending his days in casinos. With nothing to lose, the old man slipped in through a glowing doorway. He was surrounded by disheartened men in sharp shoes and cheap suits. Bet, lose, bet, lose. Time passed and an older Mr Bleaney emerged on the clustered street with no money and even less faith. With nothing, he made his way back to the bed-sit. "No. That's really terrible sir, but you won't be able to stay here for much longer. Oh that is a shame, that is downright terrible sir" quacked his landlady "Yes... well" gestured an unshaven Mr Bleaney as he made his way to his room. He slammed the hook-less door as his unused heart fretted in his chest. He stopped and looked out of the window. The gentle wind was moving the clouds around the empty sky like the tender caress of a gentle lover. It was beautiful, he thought. Why had he never noticed this simple beauty before? He glanced at the four walls and grinned. This cold, hired room was all he deserved, he warranted no better. ...read more.

However, as I dropped the dusty mattress, dozens of small pink coupons, dating from over forty years ago, floated to the floor like sacrilegious autumn leaves. Like me Mr Bleaney also gambled. This disturbed me. Sinking deeper into depression and drowning in self-pity, memories of my children and my former contented self flooded my thoughts. I wondered whether Mr Bleaney had ever had any children or fallen in love. I wondered if he was alone because he chose gambling and being his own man over happiness. Standing up, I glanced at the decimated curtains and jumped when I saw an old, forlorn man staring back at me through the window. Looking closer I wasn't taken aback when I found the old man to be myself. I was Mr Bleaney. I had let my children and wife slip away from me. Since losing my family, a bed-sit existence was all I knew. I was stuck in a dead-end job; I wasn't good enough to succeed as a writer, or as anything. My pride had lost everything I ever loved. The four yellowing walls were moving, moving closer, the room was spinning; I could hear Mr Bleaney laughing. He was laughing at me. Who was I to criticise him he bellowed. I began to feel very warm. The room was silent apart from the slow tick of Mr Bleaney's clock. A slow, deliberate sound that put one's teeth on edge as a copious reminder that my life had slipped away. That life is short and has passed. The room was aflame. This was my h**l. Elaine Briggs ...read more.