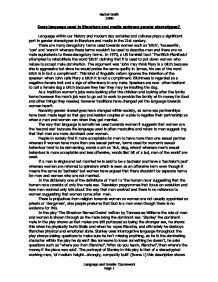 Does language used in literature and media embrace gender stereotypes?

Does language used in literature and media embrace gender stereotypes? Language within our history and modern day societies and cultures plays a significant part in gender stereotypes in literature and media in the 21st century. There are many derogatory terms used towards women such as 'bitch', 'housewife', 'cow' and 'wench' whereas these terms wouldn't be used to describe men and there are no male equivalents to these derogatory terms. In 1970, a US feminist tract 'The Bitch Manifesto' attempted to rehabilitate the word 'bitch' claiming that it is used to put down women who refuse to accept male domination. The argument was 'John may think Mary is a bitch because she is aggressive but since he would praise the same quality in James, his use of the word bitch is in fact a compliment'. This kind of linguistic reform ignores the intention of the speaker: when John calls Mary a bitch it is not a compliment. Bitchiness is regarded as a negative female trait and a sign of effeminacy in any male. Speakers are now often hesitant to call a female dog a bitch because they fear they may be insulting the dog. As a tradition women's jobs were looking after the children and looking after the family home however the man's job was to go out to work to provide the family with money for food and other things they needed, however traditions have changed yet the language towards women hasn't. ...read more.

to be submissive to the male characters in the play, Stanley and Mitch, however she doesn't succeed and ultimately is defeated by the dominance of Stanley. Stella, one of the main characters in the play, shows her submissive nature towards Stanley. In scene three when the men are playing poker, Blanche provokes Stanley by continuously turning the radio on, this frustrates Stanley and causes him to hit Stella. Stanley here shows his dominance over the women, Stella and Blanche. The same night after Blanche initially leaves Stanley she returns to him and forgives him, this shows the weakness of her character showing that she deems it acceptable for Stanley to physically abuse her, even though she is pregnant and the abuse could have caused harm to her unborn baby. When Blanche questions whether Stella thinks its alright for Stanley to hit her she replies '...it wasn't anything as serious as you seem to take it...when men are drinking and playing poker anything can happen...' this shows that Stella makes excuses for Stanley and just because he had been drinking it was acceptable for him to hit her. In the long running programme 'Desperate Housewives' social stereotypes are portrayed. Brie is a typical housewife who cleans, tidies and cooks in the family home whilst the husband goes out to work. ...read more.

In the play 'Anthony and Cleopatra,' we see that Cleopatra is referred to as being a snake, '...my serpent of Old Nile, For so he calls me' In Shakespearean times when plays were performed in the theatre only men were the actors, even if there was a female character it would be performed by a man because women were seen as not being good enough to be able to act. Another example of the inferior language towards women would be the way that straight men verbally abuse homosexual men, they insult them by using words that often describe women 'sissy' 'feminine' 'womanish' 'pretty boy' 'nancy', all of these terms refer to women showing that if they want to insult someone because they think they're inferior or different then all they need to do is call them a women or say that they are acting like a women. From looking at magazines such as 'Max Power' and 'Loaded' which are men's magazines we can see that women are often portrayed as being personal assets of men, In 'Max Power' the parts of cars are referred to as being women. The divide between men and women stretches as far back as common Christmas carols. In the hymn 'Good Christian Men' there is no reference to women. ...read more.