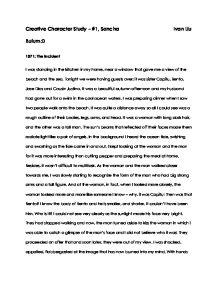 Creative Character Study - #1, Sancha Ivan Liu Buium:D 1871: The Incident I was standing in the kitchen in my home, near a window that gave me a view of the beach and the sea. Tonight we were having guests over; it was sister Capitu, Bento, Jose Dias and Cousin Justina. It was a beautiful autumn afternoon and my husband had gone out for a swim in the cool ocean waters. I was preparing dinner when I saw two people walk onto the beach. It was quite a distance away so all I could see was a rough outline of their bodies, legs, arms, and head. It was a woman with long dark hair, and the other was a tall man. The sun's beams that reflected off their faces made them radiate light like a pair of angels. In the background I heard the ocean tide, swishing and swashing as the tide came in and out. I kept looking at the woman and the man for it was more interesting than cutting pepper and preparing the meal at home. Besides, it wasn't difficult to multitask. ...read more.

Thinking of what I had wanted to talk to Bento about, I sighed. I was distressed - the image of my husband that has burned into my memory was making me upset. In an attempt to change the mood, I lifted my head and tried to smile. Then I tilted my head slightly and looked at Bento for a minute. Bento looked back. I gazed deep into his eyes; his eyes showed contentment, and clueless as to the evil that I intended to be set upon him. Then I decided I couldn't. Anger latched onto me like harpoons on a seal that gave me great grief. My tongue was in need of projecting those bitter memories and releasing the swell of emotions that has engulfed my thoughts since this afternoon. I wanted to tell him, but I just couldn't because I don't want to devastate his mood. I turned away to give it more thought. I went to the piano where Capitu was playing music where for a while, I stared at her face with great contempt and anger. Every note released by her fingertips was knife wounds to my body. ...read more.

1901: Letter to Bento (Ch.CXXIX) Dear Bentinho, The day after that evening, catastrophe struck. I must confess that it was I who killed Escobar! My dear husband has confessed to the incident, which is described in the journal attached to this letter, after I interrogated him. His conscience must have distracted him on that fateful day when he was combating the waves for even a split second of distraction was fatal. I had meant to reveal the truth to you that same day, had not Escobar succumbed to the rough waters. After the catastrophe, my revolting abhorrent for him resided, as he was my husband, and I loved him with my whole heart and my resentment towards him was forgotten. Upon reading your book - Dom Casmurro, I must clarify that it wasn't an expression of love towards you that evening, in which you had misunderstood it to be, but it was rather a reaction to the incident that occurred that afternoon. Had you expressed your thoughts to me sooner, I would have told you about this incident earlier. I apologize gravely for not doing so for the results may have been different if you knew earlier. Take great care now, Dona Sancha ...read more.