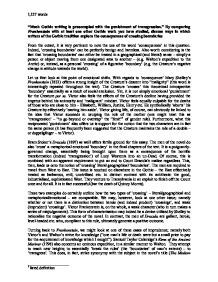 "Much Gothic writing is preoccupied with the punishment of transgression." By comparing Frankenstein with at least one other Gothic work you have studied, discuss ways in which writers of the Gothic tradition explore the consequences of crossing boundaries From the outset, it is very pertinent to note the use of the word 'consequences' in this question. Indeed, 'crossing boundaries' can be perfectly benign and harmless. Also worth considering is the fact that 'crossing boundaries' can either be treated in a geographical (and literal) sense - simply a person or object moving from one designated area to another - (e.g. Walton's expedition to the Arctic) or, instead, as a personal 'crossing' of a figurative 'boundary' (e.g. the Creature's negative change in attitude towards the world). Let us first look at this point of emotional shifts. With regards to 'consequence' Mary Shelley's Frankenstein (1831) offers a strong insight of the Creature's descent into "malignity" (this word is interestingly repeated throughout the text). The Creature 'crosses' this theoretical introspective 'boundary' essentially as a result of social exclusion. Yet, it is not simply emotional 'punishment' for the Creature per se. ...read more.

We may, however, look at one other issue; namely whether or not there is a distinction between heroic (and indeed prudent) 'crossings', and weak (imprudent) 'crossings'. Victor Frankenstein is, on the whole, a weak character (who in turn makes a series of misjudgements). This form of characterisation may indeed be a device utilised by Shelley to rationalise the negative outcome of the novel. In contrast, the men of Dracula are gallant, heroic, level-headed etc. who, compliant to this rule, ultimately generate a positive outcome. Turning back to Frankenstein, we might look at one of these cases of imprudence; namely both Victor's and Walton's strive for knowledge ("one man's life or death were but a small price to pay for the acquirement of knowledge which I sought"). Samuel Taylor Coleridge's Rime of the Ancient Mariner (1798) also concerns an ominous expedition, in a similar manner to Walton. They attempt to reach new heights; to essentially 'break the rules' (the 'boundaries' of man's extents) - to 'transgress'. This does, in fact, strike synonymy with the subject in the novel's title (The Modern Prometheus). ...read more.

It is a very eccentric and bizarre outcome of a 'crossing'; the reference to the Princess makes us contemplate that the most pertinent issue is not in fact her 'crossing' of the literal geographic 'boundary', but instead a 'boundary' from the knowing to unknowing. It is as though the Princess has forgotten aspects of her life - like she has moved from a state of full consciousness to amnesia. Regardless of such interpretations, these strange storylines do certainly succeed in providing the Gothic with its enticing quality. To summarise, then, the range of 'consequences' as a result of 'crossing boundaries', as well as interpretations of the intrinsic meaning of this, are far reaching. There are metaphorical, emotional 'crossings' of 'boundaries', which may, or may not, be compatible with literal, geographical 'crossings'. In addition, it would appear to be the case that the 'consequences' - positive or negative - of such endeavours are seemingly contingent on the nature of said 'crossing' - whether it is heroic or feeble, prudent or imprudent. The scene from Vathek simply succeeds in demonstrating the ambiguity of the Gothic. The mysterious and strange manifestations of it demonstrate fully how the genre can both confuse and fascinate the reader. ?? ?? ?? ?? 1,127 words _____________________ 1 listed definition ...read more.