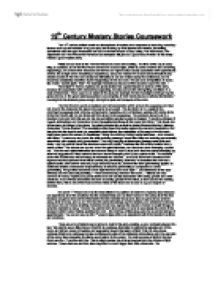 19th Century Mystery Stories Coursework The 19th century writers create an atmosphere of mystery and suspense by including some key factors such as; the inclusion of a good plot, the building up of suspense and tension, the setting, sometimes also the type of narrative can add to the feel of such a story. Using The Red Room, The Signalman and The Pit and the Pendulum as examples will give us a good idea of what it is that really makes a good mystery story. Firstly we can look at the The Red Room and look at the setting. The time of the day is a key thing to consider, and in the Red Room we know it is set at night, which is a time of crime and unnerving happenings, it is a time when shadows are formed and night is also usually associated with supernatural events. It's at night when everything is mysterious, scary and makes him unsure about himself. It also creates doubts in his mind and slowly but ultimately as we see it takes away his confidence, and he becomes completely unearthed by the happenings in the red room. We see a lot of repetition of words like "dark", "candle light", "fear". For example "Monstrous shadow of him crouched upon the wall..." "Moonlight" in horror, mystery and ghost stories has a great impact on scenes of the story because it is associated with werewolves especially, but also adds to the dim lighting conditions in a dark environment. This is used to an extent in the story for example "for the moonlight coming in by the great window on the grand staircase picked out everything in vivid black shadow or silvery illumination," moonlight in this incident gives enough dim light to pick out the layout of the room. The Red Room is set in an isolated and remote location which adds to the suspense and fear not only for the character but also to the reader to an extent. ...read more.

Not only that, but the first few sightings that the signalman has of the Ghost or phantom, are always in the dark. This ties in with the theme we looked at in The Red Room of supernatural and mysterious events occurring in the dark. Again we see the emphasis that is put on the darkness inside the tunnel, especially during the lurking darkness at night. This creates a feeling of unknown information, unknown secrets, and recalls the reader to think of the possibility of scary goings on in that tunnel that he doesn't know much about. Darkness is the main theme in this story too which we know is when crimes are committed and indicates that something very bad is on the verge of happening. Darkness as we saw from the Red room too, creates sign of unfamiliar happenings. Where the story is located is also plays a major role in creating mystery and tension as we saw from the red room. An isolated location and the isolation of the main character create a good effect of mystery and suspense. It makes the reader always read on intently for the upcoming events in the book, and puts him in the driver's seat as the character is alone and anything is possible. Loneliness due to isolation of the setting means there is no-one to interact with thus creating doubts in the character's mind of what is coming next. Loneliness is linked with time night time as it is when everybody sleeps and the outdoors are isolated. The fact that there are two characters, makes it less frightening for the two, even though they are on deserted railway line "Just then came a vague vibration in earth and air quickly changing into a violent pulsation and an oncoming rush," the sudden unexpected arrival of the train from a vague vibration to a sudden onrush of a huge vehicle. ...read more.

It suddenly involves us into the story; we can experience what the character's feelings are. It has a similar effect to the use of short sentences, and when both are combined they are used to perfection, and are very effective. This story as with the Red Room and the Pit and the Pendulum is set in the 1st person. 1st person narration, has the greatest effect on this style of story because we can experience all off the emotion of the character through himself, especially due to the fact he is one of the two who are there, if there were a lot of people other forms of narration are effective. We get a real feeling we are in his place, and keeps the reader involved in the story. As with the Red Room, the reader only has access to the information known by the narrator, which brings suspense. "There was something in that man that daunted me," this is an example to show that the reader gets to know everything that the narrator is thinking. He is positive of the sightings being tricks of light and sounds, which have had disturbances over the microphone. Since it is in 1st person, the narrator only knows what the signalman knows, and if it was in the 3rd person we know a lot more, so the sense of disbelief also adds to the tension by the use of 1st person writing. As a result, we also have to follow his path of thinking as we are not provided with any more information than the narrator already knows. The first person narrator always leaves questions in our minds and there is a lot of unknown information, not only to the narrator but it adversely affects us, because of our knowledge being the same as his. It lures us to read on and to discover what the missing information is, and in what ways and how it may affect he story. As with the Red Room the contrast of dark and light work well. ...read more.