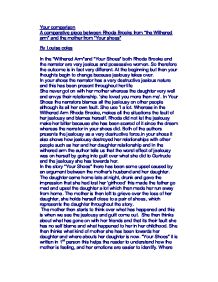 A comparative piece between Rhoda Brooks from &quot;the Withered arm&quot; and the mother from &quot;Your shoes&quot;.

Your comparison A comparative piece between Rhoda Brooks from "the Withered arm" and the mother from "Your shoes" By Louise coles In the "Withered Arm"and "Your Shoes" both Rhoda Brooke and the narrator are very jealous and possessive women. So therefore the outcome is in fact very different. At the beginning but then your thoughts begin to change because jealousy takes over. In your shoes the narrator has a very destructive jealous nature and this has been present throughout her life She never got on with her mother whereas the daughter very well and envys their relationship. 'she loved you more than me'. In Your Shoes the narrators blames all the jealousy on other people although its all her own fault. She use 'I a lot. Whereas in the Withered Arm Rhoda Brooke, makes all the situations the fault of her jealousy and blames herself. Rhoda did not let the jealousy make her bitter because she has been scared of it since the dream whereas the narrator in your shoes did. Both of the authors presents the jealousy as a very destructive force.in your shoes it also shows how jealousy destroyed her relationships with other people such ...read more.

She then thinks what kind of mother she has been towards her daughter and where abouts her daughter is now. "Your Shoes" it is written in 1st person this helps the reader to understand how the mother is feeling, and her emotions are easier to identify. Where as in the "The Withered Arm" it is written in third person, so the reader sees it more as an observation rather than a personal view. In "the Withered Arm" there is a very lonely women named Rhoda brook, she once had been in love with a man called Farmer Lodge. The two broke up and farmer lodge left Rhoda carrying his child. He then later on returns with a new wife and it all brings it back to Rhoda how much she loved him. My first thoughts on Rhoda Brook (the main character) were that she was a loner and a thin fading woman of thirty and milked the cows away from the other women. She doesn't socialise or join in, in their conversation; one milkmaid refers to Rhoda as just a 'she', well that's what my thoughts were. ...read more.

better than her and that lifes not worth living in her eyes and begins to this that she was not good enough for farmer lodges love. I think they also compare because the jealousy is very much the same. Both women are jealous of the other person in "your shoes" the case is the mother goes through different stages of jealousy. The mother has no self blame and therefore it is all her daughters fault even though its not and its like the mother Knows its not but needs to blame her so she is not perfect. Another type of jealousy.The mother also jealous of her daughter because of the friendship between her own mother and the daughter this also occurs later on when she talks about the daughters school friends. Her jealousy then grows to such an extent that she blacks everything out and therefore believes that the daughter has not left but is there with here but as the shoe . Where as in Rhodas case she is feeling jealous of Gurtrunde who has taken her place in the relationship between farmerlodge. This then all then turns into a feeling of guilt cased by a dream. ...read more.