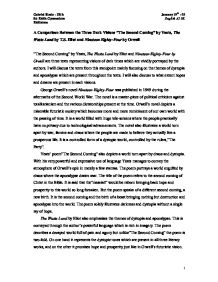 A Comparison Between the Three Dark Visions &quot;The Second Coming&quot; by Yeats, The Waste Land by T.S. Eliot and Nineteen Eighty-Four by Orwell&quot;

A Comparison Between the Three Dark Visions "The Second Coming" by Yeats, The Waste Land by T.S. Eliot and Nineteen Eighty-Four by Orwell "The Second Coming" by Yeats, The Waste Land by Eliot and Nineteen Eighty-Four by Orwell are three texts representing visions of dark times which are vividly portrayed by the authors. I will discuss the texts from this standpoint mainly focusing on the themes of dystopia and apocalypse which are present throughout the texts. I will also discuss to what extent hopes and dreams are present in each visions. George Orwell's novel Nineteen Eighty-Four was published in 1949 during the aftermaths of the Second World War. The novel is a master-piece of political criticism against totalitarianism and the various dictatorships present at the time. Orwell's novel depicts a miserable futuristic society which becomes more and more reminiscent of our own world with the passing of time. It is a world filled with huge tele-screens where the people practically have no privacy due to technological advancements. The novel also illustrates a world torn apart by war, famine and chaos where the people are made to believe they actually live a prosperous life. It is a controlled form of a dystopic world, controlled by the rulers,"The Party". ...read more.

Surely things could not get worse, the poem describes a cry of despair: "Surely some revelation is at hand; Surely the Second Coming is at hand." The Second coming of a saviour is expected but instead, out of the"sands of the desert", a sphinx comes as darkness crept back into the corners of the world. Adding the final apocalyptic tone to the poem Yeats writes:"And what rough beast, its hour come round at last, Slouches towards Bethlehem to be born?". The image of the beast slouching towards Bethlehem truly gives us the feeling of hopelessness as the apocalypse draws near. The reign of The Party is also a second coming. As O'Brien tells Winston at the end:"Do you begin to see, then, what kind of world we are creating? It is the exact opposite of the stupid hedonistic Utopias that the old reformers imagined. A world of fear and treachery and torment (...)" (p.279) The Waste Land opens just as tragically and chaotically as "The Second Coming". It depicts pain and agony through powerful words such as "shouting" and "crying" and also by stating: "He who was living is now dead, We who were living are now dying". ...read more.

The item awakens their longing for another world since they are aware of the misery of their own. This other world is described as the"Golden Country". An ideal world based on the hopes and dreams of the protagonists. It is described as being full of the beauty of nature which is exactly the opposite of their own world. There is also a ray of light present in Eliot's poem. It is similar to the one in Orwell's narrative. The final stanza of the poem illustrates the end of the pain and suffering, it describes a new beginning. This is done by the crowing of the c**k" Co co rico co co rico" which symbolises the departure of ghosts and evil spirits. Also the final flash of lightning and the rain further adds to the above mentioned effect. The rain brings new hope and prosperity to the lands. In conclusion, although the world is engulfed by chaos there will always be hopes and dreams which will ultimately prevail, for dystopia and apocalypse all have to end just as prosperous times have an ending. Although "The Second Coming" and Nineteen Eighty-Four do not share this vision, T.S. Eliot's The Waste Land does. Gabriel Iliesiu - IB1b January 19th - 03 S:t Eskils Gymnasium English A2 HL Eskilstuna 3 1 ...read more.