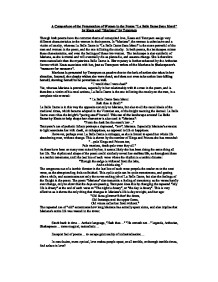 A Comparison of the Presentation of Women in the Poems

A Comparison of the Presentation of Women in the Poems "La Belle Dame Sans Merci" by Keats and "Mariana" by Tennyson Though both poems have the common theme of unrequited love, Keats and Tennyson assign very different characteristics to the women in their poems. In "Mariana", the woman is submissive and a victim of cruelty, whereas La Belle Dame in "La Belle Dame Sans Merci" is the more powerful of the man and woman in the poem, and the one inflicting the cruelty. In both poems, the landscapes mirror these characteristics, and even the feelings of these two women. The landscape is also symbolic of Mariana, as she is mortal and will eventually die as plants die, and seasons change. ...read more.

La Belle Dame even rides the knight's "pacing steed" herself. This use of the landscape around La Belle Dame by Keats to help shape her character is also used in "Mariana": "From the dark fen the oxen's low..." Tennyson's use of pathetic fallacy portrays a depressed, "low", Mariana. Especially Mariana's aversion to light associates her with death, or unhappiness, as opposed to life or happiness. However, perhaps even La Belle Dame is unhappy, as she is forced to spend her whole life abandoning men, without change. This is shown by the number of Kings and Princes she has wounded: "...pale Kings and Princes too, Pale warriors, death-pale were they all." As there have been so many men ruined by her, it seems likely she has been doing the same thing all her life. ...read more.

Tennyson does this by changing the repeated "My life is dreary" at the end of each verse to "The night is dreary", or "the day is dreary". This is very effective as it shows the only thing that changes in Mariana's life is day or night, and her age: "Old faces glimmer'd thro' the doors, Old footsteps trod the upper floors, Old voices caller her from without." The repeated use of "old" accentuates how long Mariana has actually spent alone, and also implies that Mariana's entire life was wasted in the tower. Stuck back in time... Archaic language, "Hath thee..." "He cometh not..." legends, Arthurian, Shakespeare... more magical, naturalistic... Escapist feel of poems... to escape grim reality of industrialisation... In conclusion, more cynical, love makes people upset, or all terrible, or through terrible times, find solace in love? ...read more.