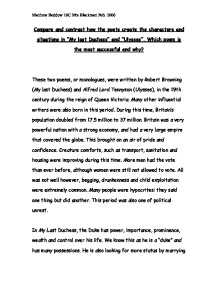 Compare and contrast how the poets create the characters and situations in &quot;My last Duchess&quot; and &quot;Ulysses&quot;. Which poem is the most successful and why?

Compare and contrast how the poets create the characters and situations in "My last Duchess" and "Ulysses". Which poem is the most successful and why? These two poems, or monologues, were written by Robert Browning (My last Duchess) and Alfred Lord Tennyson (Ulysses), in the 19th century during the reign of Queen Victoria. Many other influential writers were also born in this period. During this time, Britain's population doubled from 17.5 million to 37 million. Britain was a very powerful nation with a strong economy, and had a very large empire that covered the globe. This brought on an air of pride and confidence. Creature comforts, such as transport, sanitation and housing were improving during this time. More men had the vote than ever before, although women were still not allowed to vote. All was not well however, begging, drunkenness and child exploitation were extremely common. Many people were hypocrites: they said one thing but did another. This period was also one of political unrest. In My Last Duchess, the Duke has power, importance, prominence, wealth and control over his life. ...read more.

The Duke has control over the servant through veiled commands; for example, "Will it please you to sit" is actually a command to sit. In Ulysses the silent listener changes throughout the poem. Some examples of the silent listeners in this poem are his kingdom and his fellow mariners. Robert Browning presents the power of the Duke through his attitude to others. At the beginning of the poem he refers to the "hands" of a monk from the early Tuscan Renaissance, "Fra Pandolf". By referring to only his hands, the duke demotes the monk to the only things that are useful to him, to create the painting of his Duchess. The painting is a possession which he can control, unlike the living Duchess, and he keeps a "curtain" drawn in front of it so that no one but he can see the Duchess. The Duke also mentions "Claus of Innsbruck" who cast "Neptune" "taming a sea-horse" for "me". The emphasis on the word "me" shows that the Duke thinks he has power over famous craftsmen and how he can get them to do what he wants and can control them from all over the world. ...read more.

Ulysses is also a driven person as he talks about "roaming with a hungry heart", showing that it is adventure and discovery that keeps him alive and that he is driven by this. Overall, I think that the poem My Last Duchess was the more successful poem. By successful I mean that it was a more engaging poem and a more satisfying poem to read than Ulysses. My Last Duchess also forms a more successful historical setting and reflects the time period when it was written better than Ulysses. Ulysses, however, has a more interesting plot than My Last Duchess and actually moves, whereas My Last Duchess has a circular plot as the end ties into the beginning of the poem and can, almost, be read without the middle and still make sense. All in all, poetry is not my favorite form of literature, but if I had to pick a poem that I liked best, it would be My Last Duchess due to the fact that it was a more satisfying and engaging poem to read, with many hidden meanings. ?? ?? ?? ?? Matthew Beddow 10C Mrs Blackman Feb. 2006 ...read more.