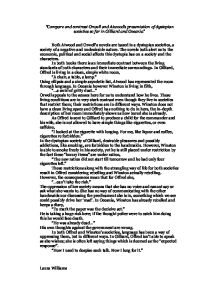 &quot;Compare and contrast Orwell and Atwood's presentation of dystopian societies so far in Gilliard and Oceania&quot;

"Compare and contrast Orwell and Atwood's presentation of dystopian societies so far in Gilliard and Oceania" Both Atwood and Orwell's novels are based in a dystopian societies, a society of a negative and undesirable nature. The novels both alert us to the economic, political and social affects this dystopia has on a society and the characters. In both books there is an immediate contrast between the living standards of both characters and their immediate surroundings. In Gilliard, Offred is living in a clean, simple white room, "A chair, a table, a lamp." Using ellipsis and a simple asyndetic list, Atwood has represented the room through language. In Oceania however Winston is living in filth, "...a swirl of gritty dust..." Orwell appeals to the senses here for us to understand how he lives. These living conditions are in very stark contrast even though they live in societies that restrict them; their restrictions are in different ways. Winston does not have a clean living space and Offred has nothing to do in hers, the in-depth description of her room immediately shows us how bored she is already. ...read more.

In Oceania, Winston has already rebelled and keeps a diary, "To mark the paper was the decisive act." He is taking a huge risk here; if the thought police were to catch him doing this he would face death. "He was already dead..." His own thoughts against the government are wrong. In both Offred and Winston's societies, language has been a way of oppressing them, but in different ways. In Gilliard, Offred isn't able to speak as she wishes; she is often left saying things which is deemed as the "expected response". "How I used to despise such talk. Now I long for it." Offred does not actually seem to have a truthful or even a full length conversation with anyone up to this point in the novel; she depends upon the trivial conversation to keep her sane. On the other hand in Oceania, there is a whole new language called 'newspeak'. This language was to make any 'thought crime' or alternative thinking impossible by removing any words or possible constructs which describe the ideas of freedom, rebellion and so on. ...read more.

However, we do not know as of yet who these people are, especially Luke. The past for her is not a nostalgic memory, "Such freedom now seems almost weightless." It just reminds her of how she used to be and how she is now. Winston on the other hand can barely remember his past; he can remember vague visions of his mother, father and sister, "He must, he thought, have been ten or eleven years old when his mother disappeared." He does not know where his family went and probably never will. This suffering extends throughout both novels, under the regimes which are in place; everyone in society suffers, whether they know it or not, not only the main characters, and this may be the most prominent theme of dystopian societies. Everyone is oppressed or brainwashed under this change in rule and culture, no one in neither '1984' or 'The Handmaid's Tale' is truly happy. In conclusion, Gilliard and Oceania have so far presented many problems being dystopian societies. They oppress those living in them; take away rights, individuality and freedom. Not only political but social restrictions have been emphasised in the two novels and most importantly how the characters are affected. ?? ?? ?? ?? Laura Williams ...read more.