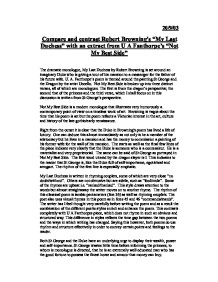 20/9/03 Compare and contrast Robert Browning's "My Last Duchess" with an extract from U A Fanthorpe's "Not My Best Side" The dramatic monologue, My Last Duchess by Robert Browning is set around an imaginary Duke who is giving a tour of his mansion to a messenger for the father of his future wife. U. A. Fanthorpe's poem is themed around the painting St George and the Dragon by the artist Uccello. Not My Best Side is broken up into three distinct verses, all of which are monologues. The first is from the dragon's perspective; the second that of the princess and the third verse, which I shall focus on in this discussion is written from St George's perspective. Not My Best Side is a modern monologue that illustrates very humorously a contemporary point of view on a timeless work of art. Browning is vague about the time that his poem is set but the poem reflects a Victorian interest in the art, culture and history of the late gothic/early renaissance. Right from the outset it is clear that the Duke in Browning's poem has lived a life of luxury. One can deduce this almost immediately as not only is he a member of the aristocracy but he lives in a mansion and has the money to commission a painting of his former wife for the wall of his mansion. ...read more.

This impression of the Duke is backed up again in the next line where he states how people would question his power and authority "if they durst." The reader has to wait slightly longer for St George to show this same crucial and underlying side to his character when in the final line he utters the words "what in any case does it matter what you want? You're in my way." This comment from St George highlights a more severe and worrying side in his character, that being his views and opinions on women. Lines 12-14 highlight this point when St George tells the princess to "carry out the roles that sociology and myth have designed for her" this shows that St George evidently feels women are of little value and importance. The Duke in My Last Duchess shares the same view as once he begins to mention his wife, several things become obvious to the reader. Firstly, that the Duke's former Duchess is a simple girl of humble origins who is probably uneducated and is thus naive, susceptible and unsuspecting. The girl is clearly very beautiful as can be seen by the pride that the Duke takes when showing the messenger the painting. ...read more.

This implies that he views her not as a person who has feelings but instead as an object of beauty who is there for his pleasure. As the Duke's wife is very undiscriminating, this makes the Duke very jealous as he feels that he should command more respect and should be made to feel special and important. When it becomes clear that the Duke's former wife is dead, the shock that this creates is palpable, as one would not expect such a rich and sophisticated man to do such a nasty, horrible and dirty thing. The Duke, however, feels that he can get away with such behaviour and a man in his position is immune from the sanctions that apply to other men. The Duke is satisfied with the painting, as finally in his mind's eye he owns his former wife. These two poems are different in many ways the authors are of different genders and they are written at different times yet they share many similarities. They are both dramatic monologues and they both focus on the character of selfish, greedy egotistical men who hold women in a very low regard. However and most crucially both the Duke and St George feel that there is nothing wrong or abnormal with their way of living and their views and opinions. Tristram Ford CH ...read more.