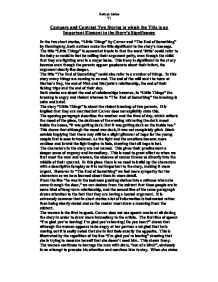 Compare and Contrast Two Stories in which the Title is an Important Element in the Story's Significance.

Compare and Contrast Two Stories in which the Title is an Important Element in the Story's Significance In the two short stories, "Little Things" by Carver and "The End of Something" by Hemingway, both authors make the title significant to the story's message. The title "Little Things" is somewhat ironic in that the word 'little' could refer to the baby or could in fact be calling their argument petty, even though the child that they are fighting over is a major issue. This irony is significant to the story because even though the parents appear passionate about their infant, the argument clearly lies deeper. The title "The End of Something" could also refer to a number of things. In this story many things are coming to an end. The end of the mill and the town at Horton's Bay, the end of Nick and Marjorie's relationship, the end of their fishing trips and the end of their day. Both stories are about the end of relationships however, in "Little Things" the breakup is angry and violent whereas in "The End of Something" the breakup is calm and brief. The story "Little Things" is about the violent breakup of two parents. It is implied that they are married but Carver does not explicitly state this. The opening paragraph describes the weather and the time of day, which reflects the mood of the piece, the darkness of the evening mirroring the dark mood inside the house, "it was getting dark. ...read more.

The baby senses the tension in the room and starts to cry which adds to the anxiety and desperation in the mood of the text, "the baby had begun to cry." Throughout the rest of the story Carver intensifies the atmosphere by using urgent and effective words such as "screaming," "red faced," "gripped" and "hurting". Nearing the end of the story the light is involved again, "the kitchen window gave no light," this line exemplifies that there was no hope left for the couple and the baby. The lines become shorter to add to the fierce battle that the couple is suffering. The man and the woman both grab the child and pull it in different directions in a hope that one will triumph but we do not know the victor. The last line "in this manner the issue was decided," leaves us pondering a number of possible out comes. The man or the woman may have succeeded in snatching the infant for themselves or they may have pulled their baby in two. If so the story appears to be a parody of the biblical story 'The Two Women and Solomon', in which a man offers to cut a baby in half to settle a quarrel between two woman as to who the mother of the baby is. In this story we are left with an ambiguous end. It is very common in short stories that the resolution of the story is left undecided, again leaving the reader to make their own conclusion from the clues given. ...read more.

Bill is a curious character. Obviously he is related to Bill in some way and Hemingway makes his sexuality and Nick's dubious when we read the line "Bill didn't touch him either." Bill appears as insensitive when he barrages Nick with questions about his extremely recent breakup, provoking Nick to lash out and tell him to leave. This story again is left at a loose end. We are left questioning the sexuality of Bill and Nick. It is implied that Nick and Bill were in a h********l relationship together. This would explain Bill's presence hiding in the wood and the fact that it states "Bill didn't touch him either." The last line shows that Bill has replaced Marjorie because Bill walks over to check the fishing rods which was previously Marjorie's job. However, Nick appears to be insecure about his choice to be gay, as we can see from the fact that he tells Bill to go away. Bill has clearly pressured Nick into breaking up with Marjorie, as we can see from the list of questions he asks and his quick appearance from the wood. Both the short stories are about the breakup of relationships but under different circumstances. As always in a short story the reader is left thinking many things from one brief text. All short stories consist of and introduction, a main conflict, a resolution and a conclusion. In "Little Things" the conclusion was the questionable death of the child. In "The End of Something" the conclusion was the appearance of Bill and the question of Nick's sexuality. Both short stories use the title as an ironic symbol of the issues that are discussed in the story. Kathryn Maher Y1 ...read more.