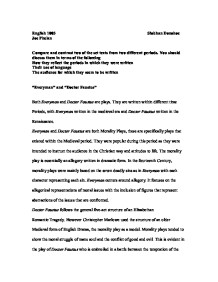 English 1003 Siobhan Donohoe Joe Phelan Compare and contrast two of the set texts from two different periods. You should discuss them in terms of the following How they reflect the periods in which they were written Their use of language The audience for which they seem to be written "Everyman" and "Doctor Faustus" Both Everyman and Doctor Faustus are plays. They are written within different time Periods, with Everyman written in the medieval era and Doctor Faustus written in the Renaissance. Everyman and Doctor Faustus are both Morality Plays, these are specifically plays that existed within the Medieval period. They were popular during this period as they were intended to instruct the audience in the Christian way and attitudes to life. The morality play is essentially an allegory written in dramatic form. In the fourteenth Century, morality plays were mainly based on the seven deadly sins as in Everyman with each character representing each sin. Everyman centers around allegory. It focuses on the allegorical representations of moral issues with the inclusion of figures that represent abstractions of the issues that are confronted. ...read more.

The medieval world placed God at the centre of existence, leaving the individual and the natural world in second place. The emergence of the Renaissance is evident in Doctor Faustus by the clash between the church and the introduction of knowledge through science. The Reformation caused a dramatic change at that particular time, England had converted from predominantly catholic to a protestant country. This shift becomes apparent in Doctor Faustus in the scenes with the Pope. The Renaissance was also a time when the bubonic plague was at its peak of destruction. As a result the plague was a great concern of the theatre, audiences and writers. The plague was a large part of Marlowe's life and work. Marlowe refers to the plague regularly in Doctor Faustus with examples such as "A Plague on her." Here Marlowe is using specific language to reflect certain aspect of the precise period, being Reformation. When considering the audience of each play, this can again create disagreement concerning the meaning of the term 'morality play.' Morality plays, as I have mentioned like Everyman, primarily express aspects of moral doctrine to the audience. ...read more.

The language used in both Everyman and Doctor Faustus represents the conflict between power and Christianity. In conclusion, Marlowe borrows many of the conventions of a morality play especially with the inclusion of the good and bad angels. This symbolizes his divided will. This is mirrored in the play Everyman where there is an obvious spiritual crisis of an individual who must chose between good and evil. Both Everyman and Doctor Faustus effectively reflect the periods in which they were written. Faustus is the product of an era that was deeply torn, it stands in the threshold between two periods-The Renaissance and the Middle Ages. It includes the notions of Good and evil, sin and salvation, as did religious dramas of the medieval period such as Everyman. Although some may see this comparison as the rejection of the medieval due to further emphasis on the individual rather than God. After all, the opening scene of Doctor Faustus was praising science and magic in favour of God. So where do we draw the line? Everyman statically reflects the period of medieval whereas Doctor Faustus focuses on the actual change in that particular period of the Reformation. Therefore it is possible to see the alteration from one period to another. ...read more.