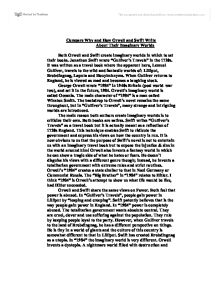 Compare Why and How Orwell and Swift Write About Their Imaginary Worlds Both Orwell and Swift create imaginary worlds in which to set their books. Jonathon Swift wrote "Gulliver's Travels" in the 1720s. It was written as a travel book where the apparent hero, Lemuel Gulliver, travels to the wild and fantastic worlds of: Lilliput, Brobdingnag, Laputa and Houyhnhnyms. When Gulliver returns to England, he is viewed as mad and becomes a laughing stock. George Orwell wrote "1984" in 1940s Britain (post world war two), and set it in the future, 1984. Orwell's imaginary world is called Oceania. The main character of "1984" is a man called Winston Smith. The backdrop to Orwell's novel remains the same throughout, but in "Gulliver's Travels", many strange and intriguing worlds are introduced. The main reason both authors create imaginary worlds is to criticize their own. Both books are satires. Swift writes "Gulliver's Travels" as a travel book but it is actually meant as a reflection of 1720s England. This technique enables Swift to ridicule the government and express his views on how the country is run. It is now obvious to us that the purpose of Swift's novel is not to entertain us with an imaginary travel book but to expose the injustice & sins in the world around him! ...read more.

The inspiration for Orwell's "1984" was from war. Whether the war is fictional or not, the government manipulate the tragic situation to keep the population loyal. Swift and Orwell share the same views on science and technology. When Gulliver visits the flying island of Laputa his is confused in a world of science. The flying island is occupied by many, many scientists with strange scientific theories. I believe the point of the scientists living on the island is to display Swifts view of all scientists having their heads in the clouds. The idea of the loadstone controlling the gravity of the island probably compares to Newton's gravity theory, which would have seemed preposterous to Swift. Technology also plays a big part in "1984". Telescreens enable the party to watch everybody all the time. This maximized the party's power because they could spy on people 24/7. In "1984" only 5% of the population are inner party members. This 5% abuse the power given to them. In "Gulliver's Travels" the flying island of Laputa is used as a weapon. The scientists of Laputa tax the people below as they pass over them. The unfairness of taxation and colonialism could be compared to a cruel and demanding government or monarchy of England during the 18th century, over Ireland. Underneath Laputa is a land called Glubdubdrib. ...read more.

After experiencing a flawless and virtuous life with the Houyhnhnyms, Gulliver cannot bear the thought of returning to England and living among those who he now sees as Yahoos. I think the point of this final land is to illustrate the two sides of human nature and to force the reader to ask him or herself what a human being really is. I think "heroes" is too strong a word to use for the lead characters in both books. Both men are normal men. Therefore, both men are as weak as they are strong. Both end up being very isolated and independent. The final similarity between the men is that they are both diagnosed mad, but are in fact both very sane men. What makes them so isolated is the fact that they are misunderstood. Winston Smith is viewed as a tragic figure where as Lemuel Gulliver is seen as a comic figure. We pity Winston but laugh at Lemuel. I think this is because he comes back from the land of the Houyhnhnyms condemning mankind and we are, as Gulliver insists, an arrogant race so how could we possibly believe what he is telling us. If Swift believes what he is writing, he is not only mocking Gulliver, but also the whole of mankind and so, himself. Andrea Thomas 10.5 ...read more.