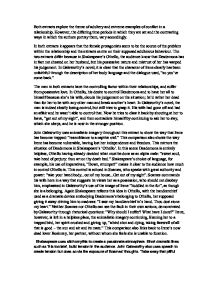 Both extracts explore the theme of adultery and extreme examples of conflict in a relationship. However, the differing time periods in which they are set and the contrasting ways in which the authors portray them, vary accordingly. In both extracts it appears that the female protagonists seem to be the source of the problem within the relationship and the extracts centre on their supposed adulterous behaviour. The two extracts differ because in Shakespeare's Othello, the audience know that Desdemona has in fact not cheated on her husband, but his possessive nature and mistrust of her has warped his judgement. In Galsworthy's novel, it is clear that the character of Irene clearly has been unfaithful through the description of her body language and the dialogue used, "so you've come back." The men in both extracts have the controlling factor within their relationships, and suffer from possessive love. In Othello, his desire to control Desdemona and to have her all to himself because she's his wife, clouds his judgement on the situation; he'd rather her dead than for her to be with any other man and break another's heart. ...read more.

Thou dost stone my heart." Neither Soames nor Othello can see the fault in their own actions, demonstrated by Galsworthy through rhetorical questions: "Why should I suffer? What have I done?" Irene, however, is left in a helpless place, the animalistic imagery continuing, likening her to a trapped bird, her spirit crushed and giving up, "a bird shot and dying, taking farewell of all that is good - the sun and air and its mate." This comparison also links back to Irene's now dead lover Bosinney, her partner, without whom she feels she is unable to function. Shakespeare uses stichomythia to create a passionate atmosphere. Short dramatic lines such as 'it is too late', build tension in the audience. John Galsworthy also uses speech to create tension but does so via the exposure of Soames' thoughts. 'Take away that pitiful white face'. Soames' outburst is made particularly striking in the way that Galsworthy withholds excessive speech up until this point. Unlike Shakespeare who employs continuous dialogue and only one stage direction in this extract, to create a sense of a never ending flow of emotion. ...read more.

miss, or exceed the mark', this shows his dark side and makes the reader question whether he killed her himself without knowing what she had done, similar to the way Othello acts on rage of his pride being damaged. The Duke also seems to be very possessive of the Duchess as is Othello and Soames Forsyte. Here he opens the poem 'That's my last Duchess painted on the wall' immediately highlighting he owns the painting, but also implies he owns her in person. He also seems to like the fact he can control who looks at the painting, 'the curtain I have drawn for you', but couldn't control who looked at his wife when she was alive. Additionally, in comparison to the imperatives Shakespeare and John Galsworthy use, Browning stresses the Duke's power through his quite forceful request, 'will't please you sit and look at her', almost as if the Duke is desperate for his audience to understand his anger, he states 'I gave commands', yet it seems she didn't obey him, hence he killed her, 'then all smiles stopped together'. ...read more.