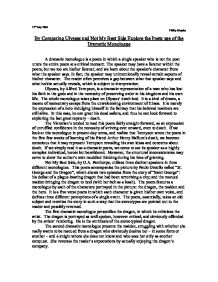 12th July 2004 Philip Murphy By Comparing Ulysses and Not My Best Side Explore the Poets use of the Dramatic Monologue A dramatic monologue is a poem in which a single speaker who is not the poet utters the entire poem at a critical moment. The speaker may have a listener within the poem, but we too are his/her listener, and we learn about the speaker's character from what the speaker says. In fact, the speaker may unintentionally reveal certain aspects of his/her character. The reader often perceives a gap between what that speaker says and what he/she actually reveals, which is subject to interpretation. Ulysses, by Alfred Tennyson, is a dramatic representation of a man who has lost his faith in the gods and in the necessity of preserving order in his kingdom and his own life. The whole monologue takes place on Ulysses' death bed. ...read more.

Not My Best Side, by U.A. Fanthorpe, utilizes three distinct speakers in three different monologues. This poem accompanies the picture by Paulo Uccello called "St. George and the Dragon", which shows two episodes from the story of "Saint George": his defeat of a plague-bearing dragon that had been terrorizing a city; and the rescued maiden bringing the dragon to heel (with her belt as a leash). The poem features a monologue by each of the characters portrayed in the picture: the dragon, the maiden and the hero. It is a free verse poem in which each character is given his/her own voice, and defines three different perceptions of a single event. The poem, essentially, takes an old subject and rewrites the story in such a way that the stereotypes are pointed out to the reader and possibly reversed. The first dramatic monologue personifies the dragon, in which he criticizes the artist. ...read more.

Not My Best Side, however, is a playful debunking of the old stereotypes of a bygone eras. The author has given a voice to three characters that previously did not have one, and we therefore discover their true feelings through three distinct monologues. It is light hearted, even as the dragon criticizes the artist. The language is easier for a modern-day reader to understand and may, therefore, capture the reader's interest more strongly. There is one strong similarity between the two poems, however. Just like in Ulysses, Not My Best Side shows the idealism of the artist. Fanthorpe has said of her poems, "What's important to me is people - even landscapes are important because of what people have done to them and so on. I'm particularly involved with people who have no voice: the dead, the dispossessed, or the inarticulate in various ways." Just as knowing that Tennyson was mourning at the time of writing Ulysses, so does knowing Fanthorpe's idealism behind her works show us deeper insight into the content of Not My Best Side. ...read more.