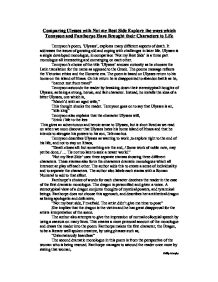 Comparing Ulysses with Not my Best Side Explore the ways which Tennyson and Fanthorpe Have Brought their Characters to Life Tennyson's poem, 'Ulysses', explores many different aspects of death. It addresses the issues of growing old and coping with challenges in later life. Ulysses is a single developed monologue, in comparison 'Not my Best Side' is a three part monologue all intersecting and converging on each other. Tennyson's choice of the title 'Ulysses' arouses curiosity as he chooses the Latin translation for the name as opposed to the Greek. The poems message reflects the Victorian ethics and the Homeric era. The poem is based on Ulysses return to his home on the island of Ithaca. On his return he is disappointed to abandon battle as he, "cannot rest from travel" Tennyson astounds the reader by breaking down their stereotypical thoughts of Ulysses, as being a strong, heroic, and fair character. ...read more.

Tis not too late to seek a newer world." 'Not my Best Side' uses three separate stanzas showing three different characters. These stanzas also form the characters dramatic monologues which all intersect an play off each other. The author adds this to create a sense of individuality and to separate the characters. The author also labels each stanza with a Roman Numeral to add to that effect. Fanthorpe's choice of words for each character deceives the reader in the case of the first dramatic monologue. The dragon is personified and given a voice. A stereotypical view of a dragon conjures thoughts of mystical powers, and tyrannical beings. Fanthorpe does not choose this approach, and describes her antithetical dragon as being apologetic and defensive, "Not my best side, I'm afraid. ...read more.

The very person who was there to rescue her. The knight in the third dramatic monologue is seen to be obsessed with technical data, equipment and information. He is seen by the reader to be self-obsessed, vain and a bully. "My spear is custom built,/ And my prototype armour / Still on the secret list /... So why be difficult" The author also makes the knight pigeon hole people in definite categories, straight forward, black and white. This adds to the feeling against him and makes the reader support the woman. The knight also seems ignorant. As he says, "You are endangering job prospects / In the spear and horse-building industries?" Both Fanthorpe and Tennyson use monologue to the full extent in their poems to build characters and add a sense of feeling. Both poets carefully lay out the poem to reflect the mood and in Fanthorpes poem, use it to divide the piece and shape it around the speech. ...read more.