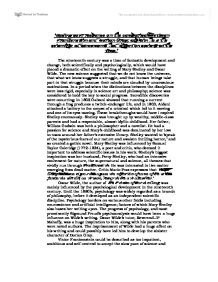 Comparison between scientific advancements in Frankenstein and Dorian Gray

'Basing your response on the comparison between Frankenstein and Dorian Gray, explain how the scientific advancements had affect on society at the time.' The nineteenth century was a time of fantastic development and change, both scientifically and psychologically, which would have placed a dramatic effect on the writing of Mary Shelley and Oscar Wilde. The new science suggested that we do not know the universe, that what we know suggests a struggle, and that human beings take part in that struggle because their minds are clouded by unconscious motivations. In a period when the distinctions between the disciplines were less rigid, especially in science art and philosophy; science was considered to hold the key to social progress. Incredible discoveries were occurring; in 1802 Galvani showed that running a current through a frog produces a twitch-endanger life, and in 1803, Aldani attached a battery to the corpse of a criminal which led to it moving and one of its eyes moving. These breakthroughs would have inspired Shelley enormously. Shelley was brought up by wealthy, middle-class parents and had a respectable, almost idyllic childhood. Her father, William Godwin was both a philosopher and a novelist. He had a passion for science and Mary's childhood was dominated by her love to roam around her father's extensive library. ...read more.

This can also be compared to Oscar Wilde's Dorian Gray. Wilde was very familiar with the Faust legend through popular culture and so incorporated its themes into his writing. Lord Henry can be associated with the devil, or at least the devil's advocate, and Dorian Gray the innocent, unwitting, insecure boy who has his flaws manipulated by Lord Henry. He persuades na�ve Dorian, to exchange his soul for eternal youth which in turn leads him to become greedy and out of control. Mary Shelley was reading the book Emile previous to writing Frankenstein. The novel argues that mans nature is harmless, but is made evil by society's perception. The monster, although visually distorted and horrendous, was not born a bad person. A parent's, or creator's job is to support and care for their creation, which Victor failed to do. Inspiration for this storyline may have originated from Mary's home life. Both Percy's and her father simultaneously disowned them for falling in love with one another, similar to Victor and the monster, on their departure she began to write Frankenstein. The theme of the 'monster in man' is very apparent in both Frankenstein and The Picture of Dorian Gray. ...read more.

This emphasises her scientific mind, she writes almost following a formula. Flashbacks are used to portray the influence the past has on the present, which proves very effective. The story is written in Chinese-box narration, each story is enfolded within another story. The letters are very important in Frankenstein as it makes the storyline reasonable apparent before it begins; it sets the scene and introduces the gothic themes and tension. Wilde's novel is reasonably different. Although events are in sequential order, clever limericks are used frequently throughout which could be seen to deter the reader away from the plot. There is a set of notes as the preface of The Picture of Dorian Gray, the most important reading 'There is no such thing as a moral or an immoral book; they are either written well, or written badly.' Oscar Wilde was wildly criticised for his writing and critics openly mocked his work, calling it immoral. The set of notes before the book begins could have been written purely for their behalf, to take a stand, and prove them wrong. In conclusion, the nineteenth century had an unbelievable affect on the writing of Mary Shelley and similarly Oscar Wilde. The progressions in science and in psychology were tremendous and although influences were found elsewhere for the authors, the most prominent were the developments and advancements of their societies. Jaidee Spear ...read more.