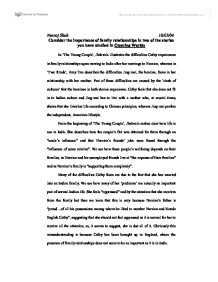 Neeraj Shah 10/03/04 Consider the importance of family relationships in two of the stories you have studied in Opening Worlds In 'The Young Couple', Jhabvala illustrates the difficulties Cathy experiences in family relationships upon moving to India after her marriage to Naraian, whereas in 'Two Kinds', Amy Tan describes the difficulties Jing-mei, the heroine, faces in her relationship with her mother. Part of these difficulties are caused by the 'clash of cultures' that the heroines in both stories experience. Cathy feels that she does not fit in to Indian culture and Jing-mei has to live with a mother who, at crucial times, shows that she lives her life according to Chinese principles, whereas Jing-mei prefers the independent, American lifestyle. From the beginning of 'The Young Couple', Jhabvala makes clear how life is run in India. She describes how the couple's flat was obtained for them through an "uncle's influence" and that Naraian's friends' jobs were found through the "influence of some relative". We see how these people's wellbeing depends on their families, as Naraian and his unemployed friends live at "the expense of their families" and as Naraian's family is "supporting them completely". Many of the difficulties Cathy faces are due to the fact that she has married into an Indian family. ...read more.

This acceptance signifies the complete integration of Naraian back into his family, and the loss of the independence that he has had from England. It also means that the couple are now completely relying on the family (as it is the family's job), which in Cathy's view is her entrapment by the family. Cathy's pregnancy is another event that allows Naraian's family to 'tighten their grip' on the couple. They send a car to pick them up on Sunday mornings, and when they arrive at the house, seeing Cathy being brought by the family car and seeing her in the state that she is in cause the women of the house to smile "triumphantly". The use of the word "triumphantly" suggests that they have won something, which is that they have Cathy using the family car, and they have her under their influence. Also, they must be happy to see the couple's independence slowly slipping away from them, as they are further integrated into the family. Finally, even at the end of the story, at the reconciliation of Cathy and Naraian, the family play an important part. This reconciliation seems to be superficial; as our final view onto the couple's life is of the "room that was being got ready for them" with the same oppressiveness Cathy feels, in the "heavy, shiny furniture" and "ample satin bedspreads". ...read more.

Jing-mei herself shows how her mother is so important to her. After her piano recital, she is describes as having "felt the shame", but seeing as she actually set out to "put a stop to this foolish pride", surely she should be satisfied that she has achieved her goal. The fact that she feels the shame of her parents means that she is unhappy herself after seeing her mother's "stricken face", showing how only the unhappiness of her mother can affect her. Also, she obviously feels guilty as she "failed her so many times", and the thing that frightens her most is to ask her mother why she had given up hope. Again, it is at her mother's unhappiness and loss of faith that affects Jing-mei the most, showing how her mother's feelings are so important to her. The way the two stories differ in their portrayal of the importance of family relationships, is that in 'The Young Couple', the influence of the family has a negative effect on the couple, and this does not get resolved, as Cathy still pictures the room being got ready for them at the end, whereas in 'Two Kinds', even though Jing-mei's mother's insistence and pressure makes Jing-Mei humiliate herself and her mother, the reader still gets the impression that the fighting and pressure does not have a lasting effect on her, as she is eventually "perfectly contented". ...read more.