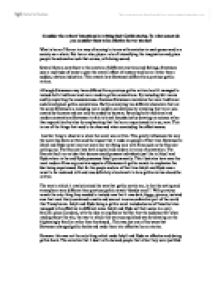 Consider the writers' intentions in writing their Gothic stories. To what extent do you consider them to be effective horror stories?

Consider the writers' intentions in writing their Gothic stories. To what extent do you consider them to be effective horror stories? What is horror? Horror is a way of coming to terms with anxieties in each person and in a society as a whole. But horror also plays a role of intensifying the imagination and gives people the adrenaline rush that comes, with being scared. Several factors contribute to the creation of different emotions and feelings. Stevenson uses a multitude of ways to give the overall effect of mystery and horror rather than a sudden, obvious indication. This reveals how Stevenson differs from previous gothic writers. Although Stevenson may have differed from previous gothic writers he still managed to include both traditional and more modern gothic conventions. By including full moons and by exploiting the excessiveness of science Stevenson maintains the more traditional and stereotypical gothic conventions. But by conveying two different characters that are the same Stevenson is including more modern conventions by revealing that terror was created by humans and can only be ended by humans. By using both traditional and modern conventions Stevenson is able to break boundaries by drawing on science rather than superstition but also by emphasizing that the horror experienced is in us, now. ...read more.

Where as Stroker pointed out quite clearly who the evil demon was, Stevenson had a more suspenseful and unique style of only giving away the odd small ounce of information. I think that for his time Stevenson was quite ahead of the game with his piece Jekyll and Hyde. His attention to detail, whether it being about the atmosphere or how a man died was very unique for that time causing him to be famous for writing a novel like Jekyll and Hyde. Both the stories of Jekyll and Hyde and Dracula have certain similarities between them. Both writers pioneered in bending and breaking the rules of classic gothic horror stories. The more traditional of these two stories is Stoker's Dracula. Set in a dark unfamiliar setting of Transylvania, where like most gothic stories there happens to be darkness, fog, isolation and the super natural. Although both are very famous stories they differ in many ways. The story of Jekyll and Hyde is more to do with expressing different ways of really intensifying the readers, or viewers' imagination. Where as Dracula is more to do with the traditional way of scaring people through super natural occurrences that happens in the story, but unlike Jekyll and Hyde, Dracula brings in more emotions. ...read more.

In the case of the Signalman a quote from Colridge revealed that it was "unclear what to conclude". I think that the unanswered questions add to the thought process that the audience must go through. This reveals how having unclear endings leads to the audience being more assertive in what to rule out and what not to. Overall the fact that the audience has to actively think adds to the creation of tension through ambiguity. To conclude I think that the writers were all trying to adjust people's perception of what is scary and what is not. By making the plot and features of the novels vary they have accomplished in changing people's views and expectation, both in society and from gothic novels. Not only managing this they have also managed to ensure that a combination of features present in novels can lead to a book becoming effective. Whether from the characters or from the tension being built up via ambiguity and other devices used to build up tension. The effect of all of these is that it takes people to a place, which they rarely visit, that place being their fears. The purpose of such novels is to make people face up to their fears, which they previously haven't experienced or haven't encountered. This reveals what the writers intention were to take people out of their mundane lives and surprise and shock them with their horror novels. ...read more.