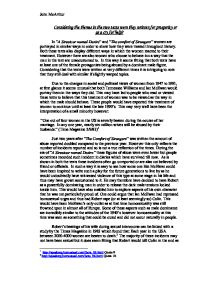 Considering the themes in the two texts were they written for prosperity or as a cry for help?

Considering the themes in the two texts were they written for prosperity or as a cry for help? In "A Streetcar named Desire" and "The comfort of Strangers" women are portrayed in similar ways in order to show how they were treated throughout history. Both these texts also display different ways in which the women reacted to their treatment. However there are also women who choose to behave inn a way that the men in the text are unaccustomed to. In this way it seems fitting that both texts have at least one of the female protagonists being abused by a dominant male figure. Considering that the texts were written at very different times it is intriguing to note that they still deal with similar if slightly warped topics. Due to the changes in social and political views of women from 1947 to 1981, at first glance it seems unusual that both Tennessee Williams and Ian McEwan would portray them in the ways they did. This may have led to people who read or viewed these texts to believe that this treatment of women was to be viewed as the way in which the male should behave. These people would have expected this treatment of women to continue until at least the late 1990's. This may very well have been the interpretation of a small minority however: "One out of four women in the US is severly beaten during the course of her marriage. In any one year, nearly six million wives will be abused by their husbands." ...read more.

To better understand Williams intentions we must first understand Blanche in greater detail. Blanche's situation with her husband is the key to her later behavior. She married rather early at the age of sixteen to whom a boy she believed was a perfect gentleman. He was sensitive, understanding, and civilized much like herself coming from an aristocratic background. She was truly in love with Allen whom she considered perfect in every way. Unfortunately for her he was a h********l. As she caught him one evening in their house with an older man, she said nothing, permitting her disbelief to build up inside her. Sometime later that evening, while the two of them were dancing, she told him what she had seen and how he disgusted her. Immediately, he ran off the dance floor and shot himself, with the gunshot forever staying in Blanche's mind. After that day, Blanche believed that she was really at fault for his suicide. She became promiscuous, seeking a substitute men (especially young boys), for her dead husband, thinking that she failed him s******y. Gradually her reputation as a w***e built up and everyone in her home town knew about her. Even for military personnel at the near-by army base, Blanche's house became out-of-bounds. Promiscuity though wasn't the only problem she had. Many of the aged family members died and the funeral costs had to be covered by Blanche's modest salary. The deaths were long, disparaging and horrible on someone like Blanche. She was forced to mortgage the mansion, and soon the bank repossessed it. ...read more.

Blanche's past and present actions & behavior, in the end, even in Stella's eyes depicted her as an insane person. All of Blanche's troubles with Stanley that in the end left her in a mental institution could have been avoided by her. Stanley and she would have gotten along better if she would have been frank with him during their first encounter. Blanche made a grave mistake by trying to act like a lady, or trying to be what she thought a lady ought to be. Stanley, being as primitive as he was, would have liked her better if she was honest with him about drinking his liquor. Blanche always felt she could give herself to strangers, and so she did try to flirt with Stanley at first. After all like she said to Stella "Honey, would I be here if the man weren't married?", Stanley did catch her eyes at first. But being brutally raped by him in the end destroyed her because he was not a stranger, he knew her, he made her face reality, and in a way he exposed her to the bright luminous light she could not stand all her life. In this way Williams is very clearly crying out that such things can ruin a persons life and will eventually come out. In the Comfort of Strangers we have a few quotes that link with the title of the novel. 'The hard mattress, the unaccustomed heat, the barely explored city'. This is in contrast to the title as it is uncomfortable in the unexplored unknown city (strange). 1 http://speakorg.homestead.com/facts_06.html Quote 9 2 http://speakorg.homestead.com/facts_06.html Quote 10 ?? ?? ?? ?? John McArthur ...read more.