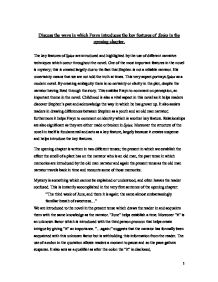 Discuss the ways in which Frayn introduces the key features of Spies in the opening chapter.

Discuss the ways in which Frayn introduces the key features of Spies in the opening chapter. The key features of Spies are introduced and highlighted by the use of different narrative techniques which occur throughout the novel. One of the most important features in the novel is mystery; this is created largely due to the fact that Stephen is not a reliable narrator. His uncertainty means that we are not told the truth at times. This very aspect portrays Spies as a modern novel. By creating ambiguity there is no certainty or clarity in the plot, despite the narrator having lived through the story. This enables Frayn to comment on perception, an important theme in the novel. Childhood is also a vital aspect in this novel as it helps readers discover Stephen's past and acknowledge the way in which he has grown up. It also assists readers in drawing differences between Stephen as a youth and an old man narrator; furthermore it helps Frayn to comment on identity which is another key feature. Relationships are also significant as they are either made or broken in Spies. Moreover the structure of the novel in itself is fundamental and acts as a key feature, largely because it creates suspense and helps introduce the key features. The opening chapter is written in two different tenses; the present in which we establish the effect the smell of a plant has on the narrator who is an old man, the past tense in which memories are introduced by the old man narrator and again the present tense as the old man narrator travels back in time and recounts some of those memories. Mystery is something which cannot be explained or understood, and often leaves the reader confused. This is instantly accomplished in the very first sentence of the opening chapter: "The third week of June, and there it is again: the same almost embarrassingly familiar breath of sweetness..." ...read more.

Childhood plays another key feature in the novel seen in the opening chapter where Frayn uses another oxymoron to present the contradiction of a, "Far-off nearby land." One interpretation of this is that the narrator is physically distant from his 'home' but nevertheless, it is nearby in his memories - again this reflects the narrator's confusion and agitation concerning the smell, as it reminds him of his childhood. "You can't go back, everyone knows that...So I'm never going then...I'm getting old." Frayn gradually reveals information concerning the narrator's persona; here we can establish that the narrator is an old man who should have a better understanding of his past then appears to be the case. The use of ellipses: "everyone knows that..." portrays that the narrator is hesitant about what he is going to do. Childish hesitation, in contrast, is to be expected as part of the process of growing up, "Keith?' I query, trying not to sound as frightened as I am. What are you doing? Where are you? I climb reluctantly back through the hole in the fence." "Reluctantly" shows that Stephen is unwilling and not keen to climb back through the fence. This proves his hesitation and dependency on Keith and the fact that he doesn't want to pursue anything without him because he doesn't have the confidence to do so. The fact that the old man narrator seems to be equally hesitant creates suspense as the reader wonders what terrible events must have occurred in his childhood. "Then the laughter's gone...I don't know what to do or what to say." Here again we witness the dilemma faced by the narrator as a child and his inability to deal with the complications set before him. By introducing the key feature of childhood in the opening chapter, we are able to witness how Stephen grows up as portrayed in Chapter Eight: "Do I feel alright?...I have a sense of freedom, as if I'm no longer bound by the rules and restrictions of childhood." ...read more.

'Suppose' shows that Stephen doesn't know the actual whereabouts of Keith which suggests he hasn't kept in contact. This seems odd as they were both very close childhood friends. The structure towards the end of the opening chapter is disjointed; this indicates the tone and reflects disjointed memories which are unsettled. "Its often hard to remember the exact words that someone uttered half a century ago, but these are easy, because there were so few of them. Six, to be precise. Spoken quite casually like the most passing of remarks, as light and insubstantial as soap bubbles. And yet they changed everything. As words do." Here readers witness "As words do" as an isolated paragraph. This suggests that words have a catastrophic impact and can be dangerous which throws emphasis on it. This creates an ominous hint of future developments. "...as light and insubstantial as soap bubbles." The use of a simile helps readers envisage the way in which those 'six words' were said without concern. "Light" suggests that the 'six words' are not said seriously which perplexes Stephen. "Insubstantial" conveys that the 'six words' were spoken with little value or importance. Moreover "bubbles" are known for disappearing in a flash of a minute; all this reflects the way in which the 'six words' were spoken with little significance. The 'six words' are as follows: "My mother is a German spy." The very fact that this is an isolated sentence sheds the importance on this line. Theses 'six words' define the novel, and reflect the title of the book to a large extent. In conclusion the key features in the opening chapter are portrayed to a large extent. The key features of mystery, perception, childhood, identity and relationships are introduced through the use of different narrative techniques which includes the use of questions, oxymoron's, isolated sentences and ellipsis's. This in turn helps enable the opening chapter to foreshadow the remainder of Spies which consequently plays an important role in constructing the novel. ?? ?? ?? ?? 1 ...read more.