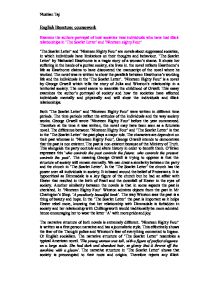 Examine the authors portrayal of how societies treat individuals who have had illicit relationships in 'The Scarlet Letter' and 'Nineteen eighty Four'.

'In ragged hedge on the opposite side of the field the boughs of the elm trees were swaying very faintly in the breeze'. The language is very flowing and resembles summer time, freshness and independence. Similarly in 'The Scarlet Letter' the woods are at the edge of the town where no one can hassle Hester. Here nature shows sympathy towards Hester as no one else does. This shows that puritans have no passion and that the woods seem to be a place where Hester can take off the letter 'A' and feel that she can escape all sins. Society has no role to play in both areas. In 'Nineteen Eighty Four' here is the theme of urban decay, which is similar to theme of nature of evilness in 'The Scarlet Letter'. The urban decay in 'Nineteen Eighty Four' is a visual reminder of totalitarian regime in which Winston lives in. it shows the imagery of rotting and decaying of London. I feel it also strongly resembles Winston and Julia's relationship. As the city is shown destroyed, their relationship also begins to decay and eventually is destroyed. At first Julia begins to feel distant and lacks in concentrating on Winston's believes and interests. He relationship then is destroyed when they are caught and parted whilst Winston is tortured he loses interest in Julia. ...read more.

Dimmsdale represents a dim character. And the name Pearl represents valuable. There are many symbols that represent relationships. The coil in the paperweight in 'Nineteen Eighty Four' represents the relationship between Julia and Winston. As the coil is tight it shows that Winston and Julia's relationship is going well but at the end it smashes showing that their relationship is destroyed. The forest in 'The Scarlet Letter' and the golden country in 'Nineteen Eighty Four' are symbolic as they represent freedom. Pearl is a symbol of Hester's relationship with Dimmsdale. I have come to a conclusion that both novels 'Nineteen Eighty Four' and 'The Scarlet Letter' contain societies that are too attached to their history and have not been able to move on and accept the present and future. They are unable to adapt to current circumstances. Also I feel that relationships are not tolerated in both societies, as the key figures in both societies are unable to understand and interoperate he human mind. Hence if they are unable to intercept or handle the situations, they rather accept that it does not exist. Therefore the key figures have turned society into a one-way thought system where everything the key figures believe in is enforced on all individuals in society. This removes any individual that is more powerful than the key figure. I.e. the character of Hester. History is totally blanked out and the main aim is to make society last eternality. Word count: 2300 Nushian Taj ...read more.