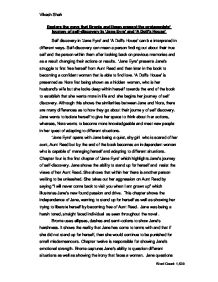 Explore the ways that Bronte and Ibsen present the protagonists' journey of self-discovery in 'Jane Eyre' and 'A Doll's House' Self discovery in 'Jane Eyre' and 'A Doll's House' can be interpreted in different ways. Self-discovery can mean a person finding out about their true self and the person within them after looking back on previous memories and as a result changing their actions or results. 'Jane Eyre' presents Jane's struggle to first free herself from Aunt Reed and then later in the book to becoming a confident woman that is able to find love. 'A Doll's House' is presented as Nora first being shown as a hidden woman, who is her husband's wife but she looks deep within herself towards the end of the book to establish that she wants more in life and she begins her journey of self discovery. Although this shows the similarities between Jane and Nora, there are many differences as to how they go about their journey of self discovery. Jane wants to isolate herself to give her space to think about her actions, whereas, Nora wants to become more knowledgeable and meet new people in her quest of adapting to different situations. ...read more.

Chapter thirty-eight shows Jane as now being able to understand love. She finds her life completely fulfilled and she has got a sense of belonging. She claims to be closer to her husband, than any other woman to their husband "I am my husband's life as fully as he is mine". Bronte is capable to presenting Jane as being a quiet girl that is tortured regular by her own family, to becoming the head of her own family, who has passion, determination, independence and the emotional strength to achieve whatever she wanted to achieve. 'A Doll's House' begins with Nora being her husband's wife - quiet and seen as an object or trophy that is never to get involved in family, financial or political matters. However, this image of Nora changes dramatically by the end of the play as Nora is a self dependent woman that is driven by her thirst for knowledge and education. The first act begins with Nora being her husband's "little skylark" that is subjected to listen to Torvald's every word and obey it as though she indebted to do so forever. However, by the end of the first act, Nora has shown another side to her. ...read more.

She wants to learn more about religion as Nora only knew "what Pastor Hansen taught me". Nora also comes to the terms with that her relationship with Torvald was a failure as she does not love Torvald and that he is a "strange" man. She also understands the fact that Torvald treated her as a "little songbird, your doll", which she no longer wanted to be. Ibsen shows women's struggle against men and shows how Nora wants to try new experiences and situations for her. Both Jane and Nora sought freedom. They were both able to achieve it through different measures. Jane's self discovery was a struggle in the fact that she had no family, no background; she became a governess and fell in love with a rich man. Jane learned to become confident with herself and she was able to achieve emotional strength as well as being self dependent. Nora's struggle was to get away from her family. She wanted to not be under the influence of her husband as she wanted to educated herself and learn more about herself and the world. She wanted to have political views and religious views. Jane and Nora managed a successful journey of self discovery and Bronte and Ibsen were able to do this through various means. ?? ?? ?? ?? Vikesh Shah Word Count: 1,539 ...read more.