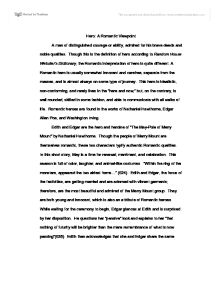 Hero: A Romantic Viewpoint A man of distinguished courage or ability, admired for his brave deeds and noble qualities. Though this is the definition of hero according to Random House Webster's Dictionary, the Romantic interpretation of hero is quite different. A Romantic hero is usually somewhat innocent and carefree, separate from the masses, and is almost always on some type of journey. This hero is idealistic, non-conforming, and rarely lives in the "here and now," but, on the contrary, is well rounded, skilled in some fashion, and able to communicate with all walks of life. Romantic heroes are found in the works of Nathaniel Hawthorne, Edgar Allen Poe, and Washington Irving. Edith and Edgar are the hero and heroine of "The May-Pole of Merry Mount" by Nathaniel Hawthorne. Though the people of Merry Mount are themselves romantic, these two characters typify authentic Romantic qualities. In this short story, May is a time for renewal, merriment, and celebration. This season is full of color, laughter, and animal-like costumes. "Within the ring of the monsters, appeared the two airiest forms..." (624). Edith and Edgar, the focus of the festivities, are getting married and are adorned with vibrant garments; therefore, are the most beautiful and admired of the Merry Mount group. ...read more.

Roderick, a mentally ill man, is beginning to resemble his equally gothic house. In this short story, Roderick invites his childhood friend to visit him. His friend, who is also the narrator, comes to lift Roderick's spirits and discovers a strange and hallucinogenic man that cannot seem to shake his feelings of gloom. Although Roderick fulfills the requirements of the Romantic hero, Poe creates a character in great contrast with that of Hawthorne's Lord and Lady May or Irving's Rip Van Winkle. "A cadaverousness of complexion: an eye large, liquid, and luminous beyond comparison; lips somewhat thin and very pallid, but of a surpassingly beautiful curve; a nose of a delicate Hebrew model...," "hair of a more than web-like softness," and "ghastly pallor of the skin" are phrases the narrator uses to describe Roderick (720). These physical descriptions of Roderick satisfy the gothic style of the Romantic hero. Roderick encompasses the very meaning of haunted mental space: "He suffered much from a morbid acuteness of the senses; the most insipid food was almost endurable; he could wear only garments of certain texture; the odors of all flowers were oppressive; his eyes were tortured by even a faint light; and there were but peculiar sounds, and these from stringed instruments, which did not inspire him with horror (721). ...read more.

His dog "was as courageous an animal as ever scoured the woods..." (431). The dog's only fear was Dame Van Winkle. A connection with nature is also associated with Romanticism. Hence, Rip's sanction was found in nature and he would often "stroll away into the woods" (432). One day in an attempt to escape from work, he wandered into the woods and fell asleep against a tree. When he awoke, many years had passed and his whole life had changed. In a search for himself, "he doubted his own identity, and whether he was himself or another man" (437). This journey in finding himself is purely romantic. Irving's work exemplifies the heroic characteristics present in romantic literature. Rip Van Winkle is the very essence of a Romantic hero: is childlike, has a deep connection with nature, is an escapist, is able to communicate with almost anyone or anything, and travels on a journey. In conclusion, not all definitions of hero can be found in the dictionary. Washington Irving, Nathaniel Hawthorne, and Edgar Allen Poe offer three contrasting portraits of a Romantic hero. Rip, Edith and Edgar, and Roderick may not fill Webster's shoes of criteria, but their wardrobe is truly Romantic. ...read more.