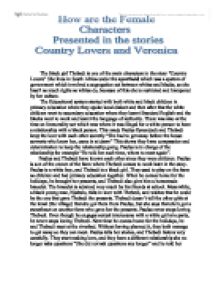 The black girl Thebedi is one of the main characters in the story "Country Lovers" She lives in South Africa under the apartheid which was a system of government which involved a segregation act between whites and blacks, so she hasn't as much rights as whites do, because of this she is restricted and hampered by her culture. The Educational system started with both white and black children in primary education where they spoke local dialect and then after that the white children went to secondary education where they learnt Standard English and the blacks went to work and learnt the language of authority. There was also at the time an Immorality act which was where it was illegal for a white person to have a relationship with a black person. This made Paulus Eysendyck and Thebedi keep the love with each other secretly "She had to get away before the house servants who knew her, came in at dawn" This shows they have compassion and determination to keep the relationship going. Paulus is in charge of the relationship for example "He told her each time, where to meet again". ...read more.

I think this is symbolism as the guilt hoop ear rings were given to her by Paulus and she still had feelings for him. A year later the case took place and Thebedi Had a new baby "She came to court with a new born baby on her back" this shows that she has moved on and doesn't care about Paulus anymore. She also wears the earrings again "She wore the guilt hoop earrings; she was calm" I think this means she is over Paulus and just wants to get on with her new life. After the court case she speaks to the press in her native language "the black girl, speaking in her own language". I think this shows she has moved on and wants to be independent. Before that it says the press spelt Thebedi in a variety of ways "Interviewed by the Sunday papers, who spelt her name in a variety of ways" This shows that they don't really care and favour the white man Paulus Eysendyck. Veronica was set in mid Africa in about 1950's. She lived in a war torn land where there was civil unrest. ...read more.

Conclusion Thebedi is a victim of her culture as there was Immorality Act which made her's and Paulus's relationship unacceptable, less privileged education system for her colour, apartheid which was a segregation act. In Veronica the most essential issue of the story and what it all amounts to is Tradition. The life Veronica led was steeped in tradition. Every aspect of the story is based around tradition. It was traditional for men to go off to work and women to stay in the home to cook, clean and look after the children. This would explain her lack off education and why the opportunity of going to a school as a child was not open to her. There was not as many opportunities open to women because it was unusual for women to go out to work or get a job. By tradition, men have the more dominant role. Veronica was a weak female so this would explain why she took unnecessary punishment of her father when she was younger. This also would explain why women as a whole where expected to stay at home. These are the reasons why I believe Veronica did not leave for the city with Okek�. ...read more.