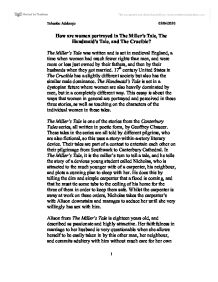 How are women portrayed in The Millers Tale, The Handmaids Tale, and The Crucible?

How are women portrayed in The Miller's Tale, The Handmaid's Tale, and The Crucible? The Miller's Tale was written and is set in medieval England, a time when women had much fewer rights than men, and were more or less just owned by their fathers, and then by their husbands when they got married. 17th century United States in The Crucible has a slightly different society but also has the similar male dominance. The Handmaid's Tale is set in a dystopian future where women are also heavily dominated by men, but in a completely different way. This essay is about the ways that women in general are portrayed and perceived in these three stories, as well as touching on the characters of the individual women in these tales. The Miller's Tale is one of the stories from the Canterbury Tales series, all written in poetic form, by Geoffrey Chaucer. These tales in the series are all told by different pilgrims, who are also fictional, so this uses a story-within-a-story literary device. Their tales are part of a contest to entertain each other on their pilgrimage from Southwark to Canterbury Cathedral. In The Miller's Tale, it is the miller's turn to tell a tale, and he tells the story of a devious young student called Nicholas, who is attracted to the much younger wife of a carpenter, his neighbour, and plots a cunning plan to sleep with her. He does this by telling the dim and simple carpenter that a flood is coming, and that he must tie some tubs to the ceiling of his home for the three of them in order to keep them safe. Whilst the carpenter is away at work on these orders, Nicholas takes the carpenter's wife Alison downstairs and manages to seduce her until she very willingly has s*x with him. Alison from The Miller's Tale is eighteen years old, and described as passionate and highly attractive. ...read more.

In contrast, the presentation of Alison in The Miller's Tale is of black humour, and an example of this is at the part near the end of the story where she humiliates Absolon, another interested suitor, in a very vulgar and insulting way. He tries to romantically pursue her but she is not very interested in him, and so when she is still with Nicholas in the house, she decides to stick her bottom out of the window for Absolon to kiss, instead of her face, which is what he had been expecting instead. Nicholas then decides to follow her example by sticking his own bottom out of the window, little knowing that an enraged Absolon had gone and come back with a scorching coulter, ready to burn Alison, but instead burns Nicholas. Despite her wild and unpleasant character, Alison is rather lucky to avoid and escape any punishment, and that it is all the men who are hankering after her, who instead become ill-fated in shameful and unfortunate events. However, with Alison and Abigail both being women, they are already in difficult positions in life, as they are both members of the slightly less important gender in their times, and each have their own individual obstacles to overcome. Abigail Williams uses her power in The Crucible to whip up hysteria in the town during the crazy period of the Salem witch trials. Her involvement starts after she has a short lived s****l affair with John Proctor whilst she is working as a house servant at his home. Whilst John is in it just to fulfil some of his needs that he is not receiving at that time from his sick wife Elizabeth, Abigail sees it a lot more than just a fling. After what we know about her troubled life and what she has been through, it's no surprise really that Abigail feels lonely and would jump at any chance she could have of some passion, love and affection, something she probably hadn't felt in a long time, if at all. ...read more.

Unlike like some of the other Handmaids, we are not directly told what Offred's real name is, though it is implied at the end of Chapter One that her name is June, since all the names listed apart from that one are accounted for at some point in the novel. This treatment of the Handmaids makes it seem as if they are animals, or objects. In addition, all the Handmaids wear a uniform of red draping garments, symbolic of several relevant things such as menstruation, childbirth and s****l sin. The clothes are also designed to cover up the curves and shape of the womanly body, in order to preserve modesty, much in the same way as many Muslim women do today. We get a deeper insight into Offred's dreary and shocking job when she bluntly describes the ceremony. The way she describes it is that the Commander is "f*****g" her, and that no other word or phrase, such as making love, copulation or r**e, fit the situation quite rightly. And the commander's wife has to dutifully lie there with her and grip her hands, as if to pretend that it is she who is being "f****d", and not Offred. This makes the situation all the more bizarre and uncomfortable for everyone involved. Out of all the female characters that we are focusing on, Offred is probably the most sympathetic. She arguably has the most difficult lifestyle to tolerate and suffer, but she mainly follows what is expected of her out of her society, and hardly does anything erroneous. The only few times she does deviate from Gilead's strict laws is when she has an illicit affair with Nick, the Commander's chauffer, which is set up by Serena Joy in order to increase Offred's chances of conceiving a child, as Serena Joy herself believes that her husband could be infertile, even though this is against the law for anyone to think. Offred proves to be the only heroine out all our female characters, since Abigail and Alison are both villainous antagonists in their respective stories. ?? ?? ?? ?? Tokunbo Adebanjo 01/04/2010 ...read more.