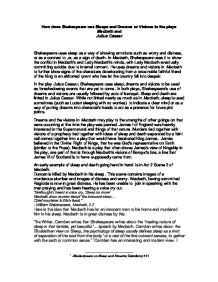 How does Shakespeare use Sleeps and Dreams or Visions in the plays Macbeth and Julius Caesar Shakespeare uses sleep as a way of showing emotions such as worry and distress, or as a contrast to ,or, as a sign of death. In Macbeth, Shakespeare uses it to show the conflict in Macbeth's and Lady Macbeth's minds, with Lady Macbeth eventually committing suicide due to internal torment. He uses dreams and visions in Macbeth to further show signs of the characters deteriorating from a once noble faithful friend of the King to an abhorred tyrant who has let the country fall into despair. In the play Julius Caesar, Shakespeare uses sleep, dreams and visions to be used as foreshadowing events that are yet to come. In both plays, Shakespeare's use of dreams and visions are usually followed by acts of betrayal. Sleep and death are linked in Julius Caesar. While not linked nearly as much as in Macbeth, sleep is used sometimes (such as Lucian sleeping with no worries) to indicate a clear mind or as a way of putting dreams into character's heads to act as a pretence for future plot points. ...read more.

Ghosts are inked to dreams and hallucinations in both plays, but also sleep. Macbeth mentions how Banquo is not lying in a grave and appears alive instead of dead. In Julius Caesar the idea is of Calpurnia crying out in her sleep. "Nor heaven nor earth have been at peace to-night: Thrice hath Calpurnia in her sleep cried out, 'Help, ho! they murder Caesar!' " -William Shakespeare, Julius Caesar 2.2 Here is a link between sleep and death, yet not in the previous sense. This quote concerns how dreams can give an indication of death, so it is not the same as sleep being a deception of death. There is a moment in Julius Caesar, which can be used to back up the idea that Shakespeare links murder and death together, while if Shakespeare wants to portray the idea of a conscience (the character has yet to dehumanise themselves, for example, Macbeth's mind and sanity deteriorates through the play) he gives them worry over what they have done. In this scene, Act Four, Scene Three of Julius Caesar, murder is linked with sleep. ...read more.

Julius Caesar was a play for the masses. It was made to show the tragedy of Brutus and Caesar and the rise of Mark Anthony in Roman history, a subject of interest to many people at the time. Dreams and visions are used to foretell events that are going to happen, possibly out of creating a plot of intrigue, or just possibly to act as a way so the public seeing the play understand what is going on and what is about to happen. It is clear that Shakespeare constantly linked sleep with death in his plays, Macbeth and Julius Caesar. Sleep is used in Macbeth primarily to show the character's emotions or used as a basis for which dreams and visions would be used to express the character's emotions. While Julius Caesar uses visions and dreams as a way of signalling death, Macbeth instead uses sleep as the main way death is often portrayed. Visions can be used as a warning, a character that ignores said warning is likely, from an audience perspective, to face consequences. Alluding to death while sleeping is itself quite an effective way of showing the audience the feelings of the characters. Since death and sleep are at a glance very similar, it serves Shakespeare's plays very well. ...read more.