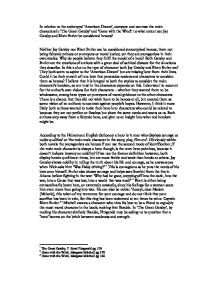 In relation to the archetypal American Dream, compare and contrast the main characters in The Great Gatsby and Gone with the Wind: to what extent can Jay Gatsby and Rhett Butler be considered heroes?

In relation to the archetypal 'American Dream', compare and contrast the main characters in 'The Great Gatsby' and 'Gone with the Wind': to what extent can Jay Gatsby and Rhett Butler be considered heroes? Neither Jay Gatsby nor Rhett Butler can be considered stereotypical heroes, them not being fairytale princes or purveyors or moral justice; yet they are protagonists in their own stories. Why do people believe they fulfil the model of a hero? Both Gatsby and Butler are the creations of authors with a great deal of satirical distaste for the situations they describe. Is this a clue to the type of character both Jay Gatsby and Rhett Butler are? They both seem to aspire to the 'American Dream' but are missing love from their lives. Could it be their pursuit of true love that persuades readers and characters to consider them as heroes? I believe that it is integral to both the stories to consider the main character's heroism, as our trust in the characters depends on this. I also want to account for the author's own visions for their characters - whether they wanted them to be wholesome, strong hero types or purveyors of moral guidance to the other characters. ...read more.

On what terms can Gatsby be considered a hero? Sarah Ellen5 said: To consider Gatsby to be a hero is really subjective. It is subjective upon which definition of heroism we use. Were his actions courageous and noble enough, or was the man just driven crazy over love? To consider Butler to be a hero is subjective based on the same factors as Gatsby and also depends on what is held in high regard as qualities determining a hero. If it is nobility and bravery, maybe these two are not the best examples of a hero, but if being an American hero is about the pursuit of happiness (and the American Dream) is there a possibility that these figures have more resemblance to heroes? The concept of 'The American Dream' is one that many people have attempted to define over the years, and its link with heroism is tenuous. The most successful definition I have read is James Evans': That dream of a land in which life should be better and richer and fuller for everyone, with opportunity for each according to ability or achievement. ...read more.