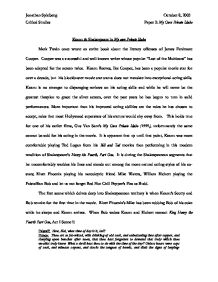 Keanu &amp; Shakespeare in My own Private Idaho.

Keanu & Shakespeare in My own Private Idaho Mark Twain once wrote an entire book about the literary offenses of James Fenimore Cooper. Cooper was a successful and well-known writer whose popular "Last of the Mohicans" has been adapted for the screen twice. Keanu Reeves, like Cooper, has been a popular movie star for over a decade, but his blockbuster movie star status does not translate into exceptional acting skills. Keanu is no stranger to disparaging reviews on his acting skills and while he will never be the greatest thespian to grace the silver screen, over the past years he has begun to turn in solid performances. More important than his improved acting abilities are the roles he has chosen to accept, roles that most Hollywood superstars of his stature would shy away from. This holds true for one of his earlier films, Gus Van Sant's My Own Private Idaho (1991), unfortunately the same cannot be said for his acting in the movie. It is apparent that up until that point, Keanu was more comfortable playing Ted Logan from his Bill and Ted movies than performing in this modern rendition of Shakespeare's Henry the Fourth, Part One. ...read more.

Unless hours were cups of sack, and minutes capons, and clocks the tongues of bawds, and dials the signs of leaping-houses, and the blessed sun himself a fair hot wench in flame-coloured taffeta, I see no reason why thou shouldst be so superfluous to demand the time of the day. What Van Sant has done with the scene is not only modernize it, but change the sexuality as well. It is a great interpretation which Richert in his portrayal of Bob convincingly takes the audience into King Henry the Fourth Part One without the audience ever feeling that they are watching a Shakespearean scene. What Keanu does as the modern Prince Hal, Scottie, is give his performance as if he were on a stage and he was speaking to the last row of the theatre. His tone and delivery scream out 'Shakespeare' and it rips the viewer out of the scene, a scene where he should have been natural and energetic in poking fun at Richert's Bob, AKA Falstaff: BOB: What time is it, son? ...read more.

Bob retells the tale with four people jumping him at first, then it is four with leather and three others for a total of seven, finally ending with eleven before he is brought down. The details from the play remain right down to the green the villains wore and it being so dark he could not see the hand in front of his face. Scottie like Hal questions how he could see that the villains wore green when he could not see his hand in front of his face. Gus Van Sant was not simply retelling King Henry the Fourth Part One. My Own Private Idaho is multilayered and textured capturing a variety of different themes and genres into one movie. Regardless of Keanu's unnatural performance with his Shakespearean lines, the movie succeeds on so many different levels that it is hard to find fault with anything else. Even the robbery scene harkens back to Elizabethan England as Scottie, Mike, Bob and crew dress as monks. Purplish-pink Monks, but fittingly since the style of the movie warrants the garish color the monks don. 2 Jonathan Spielberg October 8, 2003 Critical Studies Paper 221: My Own Private Idaho ...read more.