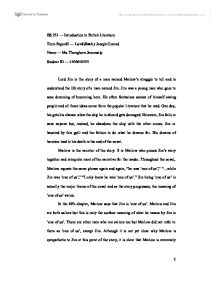 BS 251 --- Introduction to British Literature Term Paper#2 --- Lord Jim by Joseph Conrad Name --- Ms. Thongkorn Jaroensilp Student ID --- 4406640435 Lord Jim is the story of a man named Marlow's struggle to tell and to understand the life story of a man named Jim. Jim was a young man who goes to seas dreaming of becoming hero. He often fantasizes scenes of himself saving people and all these ideas come from the popular literature that he read. One day, his gets his chance when the ship he is aboard gets damaged. However, Jim fails to save anyone but, instead, he abandons the ship with the other crews. Jim is haunted by this guilt and the failure to do what he dreams for. His dreams of heroism lead to his death in the end of the novel. Marlow is the narrator of the story. It is Marlow who pieces Jim's story together and interprets most of the narrative for the reader. Throughout the novel, Marlow repeats the same phrase again and again, "he was 'one of us'," "...while Jim was 'one of us'," "I only knew he was 'one of us'." ...read more.

Jim does not like to face up with his weaknesses. His weaknesses chase him throughout the novel. Since Jim is portrayed as 'every man' throughout the novel, Jim's guilt and discomfort shows that every individual tries to hide away from his/her own negative traits. All humans find it uncomfortable to face the truth, so Jim is one of us. While it is true that Jim represents the common man, it does not mean that it is easy to understand Jim and his behavior easily. It is very important to have the sense of identification with him (the sense of understanding and sympathizing with). Jim is a romantic and in the novel, there are two persons who identify with Jim, they are, of course, Marlow and Stein. They understand a romantic like Jim, since they are one themselves. For Marlow, he sees something in Jim that corresponds to a part of himself so the story of Lord Jim is partly saying something about Marlow too. These two men are closely connected. For Stein, Stein has learned from his past experiences and knows how to handle life. He identifies with the story of Jim for, like him, he has had bad experiences and lost opportunities. ...read more.

He stands up to his code of honor and faces death bravely. In the end, he is the hero who atoned for his past sin. Lord Jim has not 'jumped' again, therefore he dies with self-esteem. This is a romantic death, for a totally romantic character of Lord Jim. In conclusion, Load Jim is more than a simple story of a romantic young man who atones for his act of cowardice by the later bravery and self sacrifice. It is symbolic to all men, "one of us." By referring to Jim as "one of us", Marlow tries to indicate that Jim belongs to the community of man in every way. Like Jim, mankind is weak and may fall from grace at any time. When man "jumps" like Jim, he is destined to live a life filled with guilt that is not easily escaped. It is because the decision to jump out of the Patna that makes Jim suffers from an obsession to regain his honor. Even Jim meets with great success later on in life, he is still haunted by his past disgrace. In the end, he already chose to give up his life for his mistake to atone for his past mistake and die in honor. Word Count : 1565 words 1 1 ...read more.