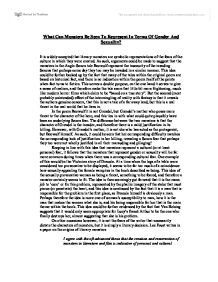 Monsters, and their representations of gender in literature

What Can Monsters Be Seen To Represent In Terms Of Gender And Sexuality? It is widely accepted that literary monsters are symbolic representations of the fears of the culture in which they were created. As such, arguments could be made to suggest that the monsters in the Anglo-Saxon tale Beowulf represent the insecurity of the invading Saxons that perhaps some day they too may be invaded in a similar manner. This idea could be further backed up by the fact that many of the tales within the original poem are based on historical fact, and there is no indication within the poem itself of the points when fact turns to fiction. This serves a double purpose, on the one hand it serves to give a sense of realism, and therefore make the tale seem that little bit more frightening, much like modern horror films which claim to be "based on a true story". But the second (most probably unintended) effect of the intermingling of reality with fantasy is that it reveals the authors genuine concern, that this is not a tale of a far away land, but this is a real threat in the real world that he lives in. In the poem Beowulf it is not Grendel, but Grendel's mother who poses more threat to the character of the hero, and this ties in with what could quite plausibly have been an underlying Saxon fear. ...read more.

The difference lies in the motivation behind it, as can be seen in the story 'Master' from Angela Carter's book of short stories 'Fireworks'. In this book the main character, who could very easily be seen as a monster in the context of the story, in the sense that he must be overcome and destroyed, and also in the sense that he is most certainly the polluting evil force in an otherwise 'pure' land, is male. Furthermore, rather than just being a male is an exaggerated, almost caricatured form of archetypical aggressive masculinity. However, at the time that the book was written, although there certainly was quite a strong feminine movement, it was not seen particularly that men should be feared, in fact if anything quite the opposite. Yet none the less there is a huge significance to the character of the monster being male. In 'Master' we are presented with the character of Master himself, the monster, at least metaphorically in the raw expression of his masculinity through violence and r**e. The killings that Master makes are barbaric beyond just the style of them, but in that he prefers to kill the more beautiful creatures, particularly the Jaguar. He does collect the pelts of them to begin with, but only to sell on and trade, rather than having any aesthetic appreciation of them, and towards the end of the story he doesn't even bother to collect them at all. ...read more.

By identifying the characters to the reader as stereotypes, or at least to contain certain stereotypical characteristics the audience identifies, or feels they know the character far more quickly, and therefore less description is needed. It is true that monsters within literature often arise from a cultural or personal fear, and that consequently those monsters that reflect issues of gender and sexuality will arise during a time of cultural s****l or gender based anxiety. However it is also true that stories are often created purely for entertainment, and as such may be influenced purely by what will make a good story rather than any need to draw out a social problem or ethical issue. As such certain stories, including the story of 'Master' may rely on our preconceived ideas of the roles that the sexes should play or conform to, but these preconceived ideas may not necessarily be regarded as a fear, but more so used as a tool for character development. In either case the representations of monsters by gender tend to be focused on extremes of gender or sexuality, be it a complete rejection of maternity as we see in Dracula, or an overpowering embracing of aggressive masculinity, and an enormous (albeit alcohol fuelled) s*x drive, both of which are characteristics of Master. ...read more.