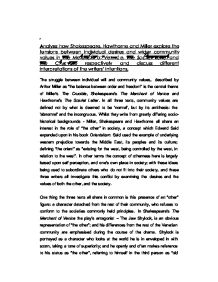 Otherness in The merchant of Venice, The Scarlet Letter and The Crucible

Oliver Denholm 13L English Literature Coursework Analyse how Shakespeare, Hawthorne and Miller explore the tensions between individual desires and wider community values in The Merchant of Venice, The Scarlet Letter and The Crucible respectively and discuss different interpretations of the writers' intentions. The struggle between individual will and community values, described by Arthur Miller as "the balance between order and freedom" is the central theme of Miller's The Crucible, Shakespeare's The Merchant of Venice and Hawthorne's The Scarlet Letter. In all three texts, community values are defined not by what is deemed to be 'normal', but by its antithesis: the 'abnormal' and the incongruous. Whilst they write from greatly differing socio-historical backgrounds - Miller, Shakespeare and Hawthorne all share an interest in the role of "the other" in society, a concept which Edward Said expanded upon in his book Orientalism. Said used the example of underlying western prejudice towards the Middle East, its peoples and its culture; defining "the orient" as "existing for the west, being controlled by the west, in relation to the west". In other terms the concept of otherness here is largely based upon self perception, and one's own place in society; with these ideas being used to subordinate others who do not fit into their society, and these three writers all investigate this conflict by examining the desires and the values of both the other, and the society. One thing the three texts all share in common is this presence of an "other" figure: a character detached from the rest of their community, who refuses to conform to the societies commonly held principles. In Shakespeare's The Merchant of Venice the play's antagonist - The Jew Shylock, is an obvious representation of "the other"; and his differences from the rest of the Venetian community are emphasised during the course of the drama. Shylock is portrayed as a character who looks at the world he is in enveloped in with scorn, taking a tone of superiority; and he openly and often ...read more.

history he cut a villainous path", and this has the effect of legitimizing what he says, and so Miller's agenda - in criticising McCarthyism in 1950's America through allegory - is better communicated to the audience. The three texts also all deeply examine the concept of heroism, and there is often a strong link between this and the concept of otherness, as well as to the conflict between an individual and their society. In Hawthorne's The Scarlet Letter, Hester Prynne is from the outset presented as the classic literary anti-hero: the embodiment of deep contradictions: bad and beautiful, holy and sinful, conventional and radical. From her first appearance she is instantly given an almost Christ-like quality as she "(makes) a halo of the misfortune and the ignominy in which she (is) enveloped" and her "figure of perfect elegance" is powerfully juxtaposed against the "unkindly visaged women". As Hester's character is shamed for her sin and alienated from the rest of society she becomes contemplative - speculating on larger moral questions, human nature, and social organisation. Here, Hawthorne expands upon the concept of American transcendentalism, where Hester rises above her extraordinary circumstances by virtue of her own intuition and sense of self, rather than reliance on, or conformity to the community's religious doctrine. Later in the novel her status as an anti-heroine is completed as she no longer "occupies the same position of ignominy previously beheld" - instead, Hester now is described as having neither "irritation nor irksomeness", having never "battled with the public, but submitted uncomplainingly to its worst usage". Here Hawthorne again revisits this concept of transcendentalism, writing of Hester's truth to herself, "not weighing upon its (societies) sympathies". The most relevant aspect of Hester's representation as a hero here is perhaps the facts she is, in many ways, portrayed as being not only a victim and an object, but as a survivor. ...read more.

Such is the case in the play's final act where Proctor proclaims "You will not use me! I am no Sarah Good or Tituba, I am John Proctor! You will not use me! It is no part of salvation that you should use me!", and this final act of defiance emphasizes his individuality, cutting him a tragic figure. Hester on the other hand, by the end of The Scarlet Letter integrates herself into a society which doesn't change, but with time comes to accept her, whilst Proctor stands as a martyr for his principles. Whilst he is undoubtedly the play's hero, Proctor is a deeply flawed character, and Miller dramatizes his inner conflicts regarding his adulterous affair to humanize him. When his wife Elizabeth begins to distrust him he bluntly tells her "I have not moved from there to there without I think to please you...I cannot speak but I am doubted, every moment judged for lies...", and this illustrates not only his perseverance in attempting to redeem himself for his sin, but his own shame in giving into temptation. This effect of this, ultimately, is that the reader is further endeared to Proctor - as his honesty makes him shine out against a highly repressive accusatory Puritan community. In conclusion, Hawthorne, Shakespeare and Miller all place great value upon the importance of individualism in society and alternatives to the common consensus. They all explore prejudice and the idea that the majority may not always be right; and the three writers present their audiences with characters who challenge societal norms, exploring the tensions between individual desire and community values when such characters put themselves forward. Writing partly as historians, Miller and Hawthorne explicitly comment on concepts such as otherness, conformity and the rigidity of certain societies, with very clear political objectives. Yet the openness to interpretation that Shakespeare's The Merchant of Venice permits gives it a great sense of ambiguity, and the intentions of Shakespeare are far less clear cut, allowing for far more debate amongst modern audiences. Word count - 3104 ...read more.