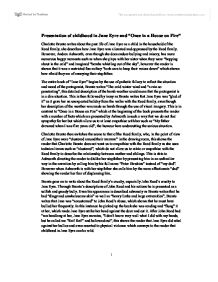 Presentation of childhood in Jane Eyre and "Once in a House on Fire" Charlotte Bronte writes about the past life of Jane Eyre as a child in the household of the Reed family, she describes how Jane Eyre was alienated and oppressed by the Reed family. However, Andrea Ashworth, even though she does endure bullying and misery, has more numerous happy moments such as when she plays with her sister when they were "hopping about in the cold" and imagined "bombs whistling out of the sky", however the reader is shown that it was a restricted fun as they "took care to keep their voices down" which shows how afraid they are of annoying their stepfather. The entire book of "Jane Eyre" begins by the use of pathetic fallacy to reflect the situation and mood of the protagonist, Bronte writes "The cold winter wind and "a rain so penetrating", this detailed description of the harsh weather could mean that the protagonist is in a dire situation. This is then followed by irony as Bronte writes that Jane Eyre was "glad of it" as it gave her an unexpected holiday from the walks with the Reed family, even though her description of the weather was made so harsh through the use of visual imagery. ...read more.

as in Victorian England diversity of race did not exist in society while "Once in a House on Fire" can be recognised by the reader as being a modern book due to the large diversity of race. Charlotte Bronte also presents Jane Eyre as living beneath the shadow of Mrs. Reed's absolute authority. After the incident where Jane Eyre defends herself against John Reeds assault, Mrs. Reed gives the order "Take her away to the red-room and lock her in there", this order was immediately obeyed as "four hands were immediately laid upon Jane Eyre", which shows that Jane is at Mrs. Reeds mercy. This is similar to Ashworth living under the absolute authority of her stepfather as the reader is shown when she has to "look up at her stepfather" to see if he would allow her to do something as trivial as eating a vanilla cake. Mrs. Reed's authority and influence also affects the servants as Bessie is afraid to be kind to Jane Eyre in the presence of Mrs. Reed but sings songs to her and speaks kindly to her when they are alone as Bronte writes "none of the Reeds were there" and Jane Eyre narrates that Bessie spoke to her "every now and then a word of unwonted kindness". ...read more.

This is in contrast to Andrea Ashworth's school, which does not punish for actions so minor but is rather accepting and welcoming of her as the reader is shown when she enters the class and the class tells her "welcome", which shows that she is accepted by both the teacher and the students of her class which reflects the image of a society less dominated by social class. Virginia Woolf wrote of the novel "Jane Eyre": "The writer has us by the hand, forces us along her road, makes us see what she sees, never leaves us for a moment or allows us to forget her", this is also true of the books presentation of childhood, were the writer makes us see what she sees, namely that childhood in Jane Eyre is precocious and somewhat stoical as well as passionate and imaginative. Marina Benjamin writes about "Once in a House on Fire": "The great strength of this memoir is that its child's-eye perspective is convincing", the novel does indeed convince the reader that even though Ashworth is bullied and is powerless, she still has her moments of happiness, which conveys the idea that children are innocent and want to simply enjoy their existence. Bronte's theme of childhood is in agreement with this as she Jane Eyre also looks for an escape from reality by reading fiction books showing the reader how children in Jane Eyre also seek happiness. ?? ?? ?? ?? 1 ...read more.

There is much insight and revealing analysis in this essay, illustrating effectively how these very different writers present their views of the childhood experience of their protagonists. Quotations are chosen well and skilfully incorporated into the fabric of the essay.

Paragraph structure is mostly well-controlled but there is quite a lot of weak sentence structure, with loose grammar and inadequate punctuation, that should not be seen at this level.