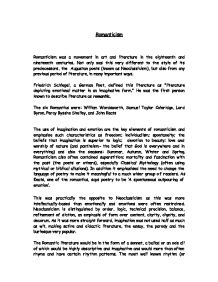 Romanticism was a movement in art and literature in the eighteenth and nineteenth centuries.

Romanticism Romanticism was a movement in art and literature in the eighteenth and nineteenth centuries. Not only was this very different to the style of its predecessors, the Augustan poets (known as Neoclassicism), but also from any previous period of literature, in many important ways. Friedrich Schlegel, a German Poet, defined this literature as "literature depicting emotional matter in an imaginative form." He was the first person known to describe literature as romantic. The six Romantics were: William Wordsworth, Samuel Taylor Coleridge, Lord Byron, Percy Bysshe Shelley, and John Keats The use of imagination and emotion are the key elements of romanticism and emphasise such characteristics as freedom; individualism; spontaneity; the beliefs that imagination is superior to logic; devotion to beauty; love and worship of nature (and pantheism- the belief that God is everywhere and in everything) and also the seasons: Summer, Autumn, Winter and Spring. Romanticism also often contained superstition; mortality and fascination with the past (the poets or others), especially Classical Mythology (often using mythical or biblical allusions). In addition it emphasised the need to change the language of poetry to make it meaningful to a much wider group of readers. As Keats, one of the romantics, says poetry to be 'A spontaneous outpouring of emotion'. This was practically the opposite to Neoclassicism as this was more intellectually-based than emotionally and emotions were often restrained. ...read more.

Later, in 1787 Wordsworth was enrolled at Cambridge. His first big encouragement to write poetry (also to write poetry using the theme of Nature) was Wordsworth's schoolmaster there, a man named William Taylor. Wordsworth believed that he 'learnt more from following his impulses and that Nature employed means towards rightful development'. In 1783 John Wordsworth died, leaving William and his brothers orphans and with no inheritance (until later). Wordsworth then went and lived with his uncle. Wordsworth travelled a great deal. In 1790 went on a walking tour of Europe. He and his friend from school, Robert Jones, arrived in France during the one-year celebration of the French Revolution. At this point Wordsworth was more interested in aesthetics than politics and it was not until a while later, in 1791 when he returned to France (and stayed for a full year), that the French Revolution made a big impact on him and he became a enthusiastic supporter of it. He returned just before the war between England and France in December 1792. This meant it was not possible to return across the Channel, to France, until 1802. He also visited Switzerland, Germany, Scotland and also went on a Continental tour. Many of the nature these places gave Wordsworth inspiration for his poems. In August 1795 Wordsworth met Coleridge and the two soon became friends. ...read more.

He also felt like everything external in life that he was a part of became like a part of him. As a youth he was unaware of death as he was so far away from it and it wasn't a part of his clear and simple perception on life and nature but as he grew it became very real to him (maybe to do with death of parents?) and asks his child self why he wanted to grow up and have all these problems lain on them? Wordsworth talks of his experiences with nature as a child and that he is happy to have all his childhood memories of nature- he rejoices and acquires strength from them. He also discusses his experiences with nature as an adult. The English romantic genre has certain features which distinguish it from other genres. The poets Keats and Wordsworth typify or provide examples of this genre. Keat's Ode on a Grecian Urn and Wordswoth's Ode on Intimations of Immortality both demonstrate the Romantic genre, but in different ways. Romanticism is a genre with certain features which Keats and Wordsworth typify by the style and content of their poems. The poems I have used to show this are Keats' Ode on a Grecian Urn and Wordsworth's Ode on Intimations of Immortality. Their poems are both very emotive and beautifully written and outline the genre well. ...read more.