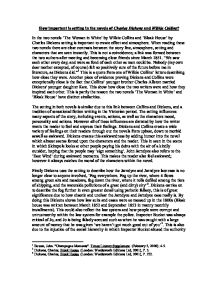 Setting and Atmosphere in Bleak House and The Woman in White

How important is setting in the novels of Charles Dickens and Wilkie Collins? In the two novels 'The Woman in White' by Wilkie Collins and 'Bleak House' by Charles Dickens setting is important to create effect and atmosphere. When reading these two novels there are clear contrasts between the story line, atmosphere, setting and characters that are seen instantly. This is not a coincidence; a link was formed between the two authors after meeting and becoming close friends since March 1851. "We saw each other every day, and were as fond of each other as men could be. Nobody (my own dear mother excepted, of course) felt so positively sure of the future before me in literature, as Dickens did."1 This is a quote from one of Wilkie Collins' letters describing how close they were. Another piece of evidence proving Dickens and Collins were exceptionally close is the fact that Collins' younger brother Charles Allston married Dickens' younger daughter Kate. This show how close the two writers were and how they inspired each other. This is partly the reason the two novels 'The Woman in White' and 'Bleak House' have distinct similarities. The setting in both novels is similar due to this link between Collins and Dickens, and a tradition of sensational fiction writing in the Victorian period. The setting influences many aspects of the story, including events, actions, as well as the characters mood, personality and actions. ...read more.

The mysteries in Bleak House point to the large mysteries of community and isolation, love and selfishness in the society that Dickens anatomizes.'4. This critical quote from Lyn Pykett, shows how she believes that the reader should portray Dickens pathetic fallacy. I agree with this quote due to it being significant in Dickens life as well as with in the novel of Bleak House. I can also get a sense of what the Wilkie Collins wants the reader to take from her characters, from the critical essay by Lyn Pykett. 'And unlike the Deadlocks and their followers in Bleak House, who represent everything that Dickens thinks is wrong with the decaying aristocracy of the 1850s, Sir Percival Glyde and Count Fosco in The Woman in White are not bearers of social of even weighty moral messages. Sir Percival is a stereotypical melodrama villain from whose career of deceit and crime Collins asks us to draw only the most obvious morals. Count Fosco is much more interesting as a character, but the shadowy Italian politics that destroyed him at the end of the novel are only a deus ex machina to bring on his just deserts.'5. Like other novels written by Collins, such as No Name and Man And Wife; Collins show the marriage laws and injustice within the system and social reform in the in the forefront. We also see that Collins is not interested with the conditions of the private asylum and secret societies. ...read more.

In Bleak House Laura is unable to see her due to her illness. In Bleak house Esther get's ill with small pox, and has a disfigurement due to them. 'when she knows I am ill'9, 'Charley; I am blind.'10This shows how the links between the setting and characters are influenced by the correlation between Dickens and Collins. These events of Esther falling ill then lead onto other issues, such as 'psychologically by her inability to believe that Woodcourt is in love with her and her consequent acceptance of Jarndyce's proposal of marriage'11. This again shows how the setting of 'Bleak House' is reflected in its name, as well as the atmosphere leading up to bad events and situations within the novel. Dickens also express strong political views in Bleak House, this is due to Dickens becoming a political journalist in 1834 for the morning chronicle. These Political views of the forgotten poor and disadvantaged in London are shown Bleak House in mainly five different chapters: Covering a Multitude of sins, Tom-all-Alone's, Mr Bucket, Nurse and Patient and Jo's will. Covering a multitude of sins describes a barrier between the well educated rich and the poor. 'We both felt painfully sensible that between us and these people there was an iron barrier, which could not be removed by our new friend.'12. This shows how dickens thought there was a barrier that could not be breached between the rich and poor. Collins Political views of the poor are not shared with Dickens, as strongly in The Woman in White. ...read more.