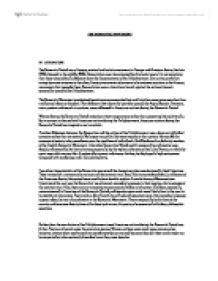 THE ROMANTIC MOVEMENT IN LITERATURE The Romantic Period was a literary, musical and artistic movement in Europe and America during the late 1700s through to the middle 1800s. Romanticism was characterised by five basic tenets. It is not surprising that these were radically different from the characteristics of the Enlightenment. Just as the pendulum swings from one extreme to the other, literary movements often seem to be extreme reactions to the literary movements that precede them. Romanticism was an intentional revolt against the rational, formal, reasonable period of the Enlightenment. The Romantic Movement emphasised emotions over reason; feelings and intuition were more prevalent than intellectual ideas or thoughts. How different this is from the previous period, the Age of Reason. Emotions, even passions and s****l attractions, were addressed in literature written during the Romantic Period. Writers during the Romantic Period wrote from their imaginations rather than presenting life realistically. So, in contrast to the realistic literature written during the Enlightenment, literature written during the Romantic Period was imaginative and unrealistic. Another difference between the Romantics and the writers of the Enlightenment was a focus on individual concerns rather than on society's. No longer was public life more important than private life nor did the concerns of society take precedence over the problems of individuals, like Wordsworth a defining member of the English Romantic Movement. ...read more.

As European To understand the music and art of the era, one must always keep an eye on the social processes that produced them. The Romantic era was sparked by many revolutions. The American Revolution, which sloughed off the rule of the monarchs as well as feudalistic tradition was soon followed by the French Revolution which also granted bold new freedoms. The Industrial Revolution was spreading throughout the West in the early 1800's along with many other literary and scientific innovations, causing much change. The resulting social upheaval reflected searching, experimentation, and a quest for the ultimate power that a human being could attain--so much so, that philosopher Frederich Nietzsche proclaimed that religion and a belief in God were completely useless. For musicians, the patronage system had been left far behind. Most were very comfortable freelancing, acting as their own agents. Romantic music represents a much more personal approach to music, writing for the common man. Where Baroque music seems to be relating to a specific few and Classical music seems to be relating to Every man, Romantic music is often a very personal journey into the private thoughts and feelings of the composer. A popular archtypical figure was the "Romantic Hero". This was the image of the impassioned artistic genius, obsessed with an ideal and a quest for perfection, tragically doomed by Fate (perhaps a physical ailment, or as we say, "struck down in the prime of life"). ...read more.

Early Romantic music was all about emotion and individual expression--the extremes of joy and sorrow, triumph and dejection, passion and despair. The intensity of passion, individualism and the striving for self-expression are central to the Romantic spirit. In an age of sweeping revolution and change, the heart of a continent torn by hysteria and madness ventured out of the darkness of the city to return to the wilds of nature. Individuality, nature, and emotion dominated the minds of restless individuals weary of logic, reason, science, and industry. The spirit of an era awoke, fuelled with passion and rebellion, and quickly spread to all aspects of culture to unveil everything contrary to the Enlightenment. The disturbing, the supernatural, the beautiful, and the wild. Romanticism, intense and rebellious, overthrew all conventions, convention had never been defied in such a manner before, nor would it ever be restored again. The era specifies to us how far Romanticism pervaded culture and continent; it shows how lasting works of Romantic art, literature, and music representative of the great era still influence us today. Most of our freedoms of thought, our passion, and our questioning nature was spawned by them, but we are forgetting what they did, becoming complacent, we are slowly slipping back into those dark times before the surge of revolution. We are not questioning but accepting what we are told, slowly those conventions and establishments are being rebuilt and repackaged, soon 1984 could be reality. ...read more.