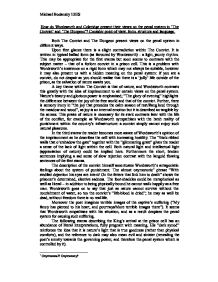 Views on the penal System: The Dungeon and The Convict

How do Wordsworth and Coleridge present their views on the penal system in 'The Convict' and 'The Dungeon'? Consider point of view, form, structure and language. Both The Convict and The Dungeon present views on the penal system in different ways. Upon first glance there is a slight contradiction within The Convict. It is written in typical ballad form (as favoured by Wordsworth) - a light, jaunty rhythm. This may be appropriate for the first stanza but soon seems to contrasts with the subject matter - that of a forlorn convict in a prison cell. This is a problem with Wordsworth's insistence on a rigid form which may not always be suitable, however it may also present us with a hidden meaning on the penal system: if you are a convict, do not despair as you should realise that there is a 'jolly' life outside of the prison, as the salvation of nature awaits you. A key theme within The Convict is that of nature, and Wordsworth contrasts this greatly with the idea of imprisonment to air certain views on the penal system. Nature's beauty and glorious power is emphasised; "The glory of evening" highlights the difference between the joy of the free world and that of the convict. Further, there is sensory irony in "the joy that precedes the calm season of rest/Rang loud through the meadow and wood", as joy is an internal emotion but it is described as tangible by the senses. ...read more.

Wordsworth could be illustrating not only that the penal system can be unfair, but also that there is not much difference between the sordid morality of the royal and that of the people at the very bottom of the social hierarchy. Wordsworth continues this motif in the eighth stanza, where he compares the lives of the King with the convict. He explains that the King is also guilty; it is just that he forgets about it amidst his lavish lifestyle ("in oblivion would doze") and that he ignores his guilty conscience, "And conscience her tortures appease". His conscience has appeased the desire to torture. By denying his conscience (i.e. its desire to do good) the King is acting unnaturally, a harsh criticism, seeing as obeying nature's will is a characteristic romantic standpoint. Wordsworth contrasts this with a description of the convict's "tumult and uproar" in his "comfortless vault of disease". The disease may be referring to actual illness, or to literally, dis-ease, a lack of comfort; this compares with the King's comfortable way of life. In order to fully show his despair at the penal system for treating convicts so badly the poet goes on to fully describe the pain of the "poor victim". The convict in the cell is unable to sleep and while the King's oblivious dozing whiles away the memory of his slaughter, the prisoner's slumber only dims the memory of his crimes. ...read more.

Wordsworth uses transplantation to suggest this, while Coleridge refers to the redemptive, healing quality of nature: "O nature! /Healest thy wandering and distempered child". In The Convict one criticism of being a prisoner in the confines of a cell is the inability to appreciate nature, specifically its ringing joy. This musical reference is alluded to in The Dungeon, "Thy melodies of woods, and winds, and waters...a jarring and a dissonant thing...dance and minstrelsy". The metaphor is at first complimented by the relaxing, almost lyrically legato alliteration of the 'w's. There is a sense of contrast between music and words. Words come from the intellect, though the convict cannot seem to trust conventional wisdom, and therefore feels more comfortable with a musical acquisition of knowledge. Finally, there is a point proved through irony in both poems. Wordsworth has written of appreciating the world through a "wise passiveness" (Expostulation and Reply) and in The Convict the poet stands alone on a mountain. What is the difference between being alone on a mountain and being alone in a cell?! It seems that the difference lies in choice: in a "wise passiveness" one chooses to be alone, so the poet is in fact airing his views on the penal system's poor and unjust rulings which place someone in solitary confinement and dismal conditions without their consultation. 1 Oxymoronal? Oxymorony? 2 Although it may not always be successful. See case of Amy Winehouse and her failed drug rehabilitation. ?? ?? ?? ?? Michael Bodansky 13HS ...read more.