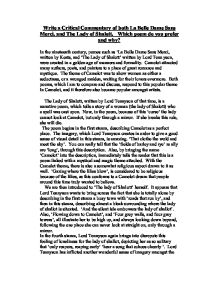 Write a Critical Commentary of both La Belle Dame Sans Merci, and The Lady of Shalott. Which poem do you prefer and why?

Write a Critical Commentary of both La Belle Dame Sans Merci, and The Lady of Shalott. Which poem do you prefer and why? In the nineteenth century, pomes such as 'La Belle Dame Sans Merci, written by Keats, and 'The Lady of Shalott' written by Lord Tennyson, were created in a golden age of manners and formality. Camelot attracted many authors, poets, and painters to a place of great romance and mystique. The theme of Camelot was to show women as either a seductress, or a wronged maiden, waiting for their lovers evermore. Both poems, which I am to compare and discuss, respond to this popular theme In Camelot, and it therefore also became popular amongst artists. The Lady of Shalott, written by Lord Tennyson of that time, is a narrative poem, which tells a story of a woman (the lady of Shalott) who a spell was cast upon. Now, in the poem, because of this 'curse' the lady cannot look at Camelot, but only through a mirror. If she breaks this rule, she will die. The poem begins in the first stanza, describing Camelot as a perfect place. The imagery, which Lord Tennyson creates in order to give a good sense of visual detail in this stanza, is amazing. 'That clothe the wold and meet the sky'. You can really tell that the 'fields of barley and rye' really are 'long', through this description. ...read more.

The part of the poem demonstrates how The Lady of Shalott is completely transfixed on the knight as he rides on his 'war horse' down the road to Camelot. The lady becomes so transfixed, that she is bewitched by him, and she 'look'd down to Camelot'. 'The mirror cracked from side to side', and The Lady of Shalott realized what she had done, and shouted 'The curse is come upon me'. The last part paints a picture of a desperate woman attempting to be discovered before death comes upon her. So, she left the mirror, and 'down she came and found a boat'. She then floated down to Camelot in the boat, singing her 'last song', 'mournful, and holy'. The lady floats ashore, with her name scratched on the outside of the boat, and is found by her bewitchment, dead. Although the poem is in itself sad, the fact that her bewitcher, the knight who caused her to die, never discovers this in the poem, and so she dies for no purpose, except that she finally saw the man of her dreams and Camelot, the land of romance, except in this case becomes ironic, as she finds her love, but dies because she looked at 'the land of romance'. La belle dame sans merci by Keats is quite different. The Lady of Shalott, is more like a story rather than a fully descriptive poem, where as this is much more dramatic. ...read more.

These two poems although the same, because they are written at the same point in time, and have similar 'fairy tale ideas', they are quite different. The narrator, in the third person, tells the Lady of Shallott where as in La belle dame sans merci, the knight is telling of his own death (because he is not yet dead and wants to warn others), therefore the story is being told in the first person. This puts a completely different perspective on the stories, because I found that after reading both of the poems, that I felt more sorry for the knight from La belle dame sans merci, rather than The Lady of Shalott. This is because 'the merciless woman' intentionally lured the death of the knight in La belle dame sans merci, where as in The Lady of Shalott, the knight unintentionally killed the lady. Also, I felt that because the story was told by the knight, that I 'knew' him more personally. My personal favorite was La belle dame sans merci. This is because like I described in my comparison, I felt that the poem was more dramatic, and more meaningful than The Lady of Shalott. I felt that Keats was more able to describe the feelings of the knight, and his betrayal in twelve stanzas, than Lord Tennyson was able to in two pages. Also, I like the fact that instead of the male luring the female to doom, and woman (especially in that time) is leading the male to his death instead. ...read more.