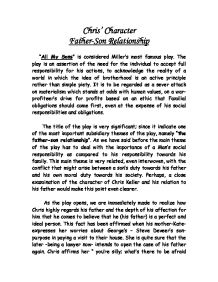 Chris' Character - Father-Son Relationship - All My Sons is considered Miller's most famous play.

Chris' Character Father-Son Relationship "All My Sons" is considered Miller's most famous play. The play is an assertion of the need for the individual to accept full responsibility for his actions, to acknowledge the reality of a world in which the idea of brotherhood is an active principle rather than simple piety. It is to be regarded as a sever attack on materialism which stands at odds with human values, on a war-profiteer's drive for profits based on an ethic that Familial obligations should come first, even at the expense of his social responsibilities and obligations. The title of the play is very significant; since it indicate one of the most important subsidiary themes of the play, namely "the father-son relationship". As we have said before the main theme of the play has to deal with the importance of a Man's social responsibility as compared to his responsibility towards his family. This main theme is very related, even interwoven, with the conflict that might arise between a son's duty towards his father and his own moral duty towards his society. ...read more.

I felt wrong to be alive, to open a bank-book, to drive the new car..." Elsewhere, Chris idealism finds expression in his feeling surprised and shocked by the revelation that his father was the real culprit in the matter of supplying defective cylinder heads to the air force, after his confrontation with his mother about Ann's stay in their house, which has developed to its peak that Kate affirms him that his father had really been guilty: Kate: ...your brother is alive, darling, because if he's dead, your father killed him. Do you understand me now? As long as you live, that boy is alive. God does not let a son be killed by his father. As his father tries to defend himself, affirming that Larry "never flew a P-40" Chris idealism has been asserted once more. He affirms his father that he seems to be living in an altogether different world from the one in which other people are living. Even when his father affirms that he had supplied defective equipment to the air forces for his (Chris) sake: "Chris...Chris, I did it for you, it was a chance and I took it for you. ...read more.

Chris, also, is responsible for his family's dilemma. Though he adopts a highly moral tone, he was only trying to escape his own sense of guilt. Having watching the heroic young men under his command die selflessly in the battle to save their comrades, Chris feels guilty for failing them and surviving the war. So when he was given a chance to escape his anguish, he tries to find relief out of his sense of guilt; in the form of contempt for his father's criminal act, on the hope that by destroying his father he can some how escape his own sins and his own personal torment. His father, thus, becomes his scapegoat. It is hard, therefore, not to see and condemn the hypocrisy behind the zeal that leads to Keller's Suicide. His motives are purely selfish. We all know that his words ring hollow because he has long suspected his father's guilt, but deliberately avoided confronting the truth-again for purely selfish motives: at some level Chris fears that if he allows himself to see his father's human imperfection, he will also have to realize his own limitations- and his experience in the war make him dread that confrontation. ...read more.