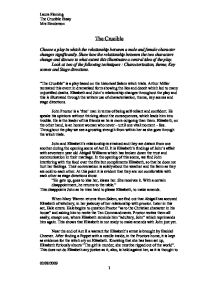 The Crucible Choose a play in which the relationship between a male and female character changes significantly. Show how the relationship between the two characters change and discuss to what extent this illuminates a central idea of the play. Look at two of the following techniques : Characterisation, theme, Key scenes and Stage directions. "The Crucible" is a play based on the historical Salem witch trials. Arthur Miller recreated this event in dramatised form showing the lies and deceit which led to many unjustified deaths. Elizabeth and John's relationship changes throughout the play and this is illustrated through the writers use of characterisation, theme, key scenes and stage directions. John Proctor is a 'free' man in terms of being self-reliant and confident. He speaks his opinions without thinking about the consequences, which leads him into trouble. He is the leader of his friends as he is more outgoing than them. Elizabeth, on the other hand, is an honest woman who never - until one vital moment - lies. ...read more.

This does not do Elizabeth any justice as it, also, is held against her, as it is thought to be a death threat. Showing true love for his wife, Proctor is prepared to lose his good name to save his wife and bring justice on Abigail. Act III happens in the court room, and this is the key scene where John and Elizabeth's relationship is put to the test. Here, Mary Warren tries to convince the court and judge Danforth that Abigail and the other girls (including herself) were only pretending. Proctor cracks and calls out "How do you call Heaven! w***e! w***e!" and blackens his name instantly. He tells Danforth "A man will not cast away his good name" which shows a little bit of selfishness he had in him before giving out this substantial evidence. He does this to get the court to believe him and show Abigails true colours on why she cried out witchcraft on Goody Proctor. This shows how desperate John is for his wife to be freed and his love for his wife. ...read more.

When they greet each other, they are both filled with intense emotions as they have not seen each other since the court hearing. They fight back the tears and Elizabeth tells John "It needs a cold wife to prompt lechery" and in this it brings them closer as John cannot bear to hear his wife talk down about herself but she continues "I never knew how I should say my love". This is a much different atmosphere between them. True love was rekindled as they spoke. They knew and respected each other more. Knowing that John has a need for his pride, Elizabeth refrains from trying to persuade Johns judgement and decisions, which I think shows great courage, strength and love on her behalf. Throughout this play, John and Elizabeth's relationship changes dramatically. During the second act, they both found it painfully hard to be around each other and act normally, but through something as serious as being accused of witchcraft and sentenced to jail has brought them closer. This was achieved by techniques such as characteristics, theme, key scene and stage directions. ?? ?? ?? ?? Laura Fleming The Crucible Essay Mrs Henderson 02/08/2009 1 ...read more.