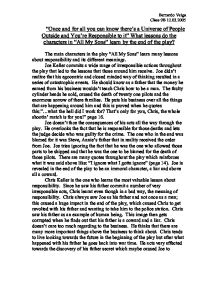 The main characters in the play &quot;All My Sons&quot; learn many lessons about responsibility and its different meanings.Joe Keller commits a wide range of irresponsible actions

"Once and for all you can know there's a Universe of People Outside and You're Responsible to it" What lessons do the characters in "All My Sons" learn by the end of the play? The main characters in the play "All My Sons" learn many lessons about responsibility and its different meanings. Joe Keller commits a wide range of irresponsible actions throughout the play that led to the lessons that those around him receive. Joe didn't realize that his egocentric and closed minded way of thinking resulted in a series of catastrophic events. He should know as a father that the money he earned from his business wouldn't teach Chris how to be a man. The faulty cylinder heads he sold, caused the death of twenty one pilots and the enormous sorrow of there families. He puts his business over all the things that are happening around him and this is proved when he quotes this:"...what the h**l did I work for? ...read more.

Chris Keller is the one who learns the most valuable lesson about responsibility. Since he saw his father commit a number of very irresponsible acts, Chris learnt even though in a bad way, the meaning of responsibility. Chris always saw Joe as his father and not once as a man; this caused a huge impact in the end of the play, which caused Chris to get revolted with his father and wanting to take him to the police station. Chris saw his father as an example of human being. This image then gets corrupted when he finds out that his father is a coward and a liar. Chris doesn't care too much regarding to the business. He thinks that there are many more important things above the business to think about. Chris tends to live looking towards the future in the beginning of the play but after what happened with his father he goes back into war time. ...read more.

This argument is supported by this quotation: "your brother's alive, darling, because if he's dead, your father killed him. Do you understand me now? As long as you live, that boy is alive. God does not let a son be killed by his father" page 66. I think that the entire moral of the story is related to the title "once and for all you can know there's a universe of people outside and you're responsible to it". Since the beginning from the story it can be realized that every action taken by any character had a bigger consequence in the end of the play. It all joined up to build a big web of irresponsible and immature acts from all parts. Joe can't be blamed for everything, because Kate could have stopped him, Steve could have taken control and aborted the shipping of the faulty cylinder heads and Chris could have given more attention to the business and could have avoided this episode. Bernardo Veiga Class 9B 12.03.2005 ...read more.