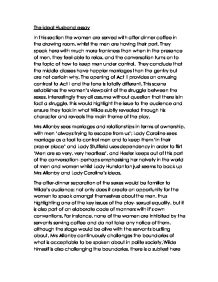 A woman of no importance- the ideal man discussion

The ideal Husband essay In this section the women are served with after dinner coffee in the drawing room, whilst the men are having their port. They speak here with much more frankness than when in the presence of men, they feel able to relax, and the conversation turns on to the topic of how to keep men under control. They conclude that the middle classes have happier marriages than the gentry but are not certain why. The opening of Act II provides an amusing contrast to Act I and the tone is totally different. This scene establishes the women's viewpoint of the struggle between the sexes, interestingly they all assume without question that there is in fact a struggle, this would highlight the issue to the audience and ensure they took in what Wilde subtly revealed through his character and reveals the main theme of the play. Mrs Allonby sees marriages and relationships in terms of ownership, with men 'always trying to escape from us'; Lady Caroline sees marriage as a tool to control men and to keep them 'in their proper place' and Lady Stutfield uses dependency in order to flirt 'Men are so very, very heartless', and Hester keeps out of this part of the conversation- perhaps emphasising her naivety in the world of men and women whilst Lady Hunstanton just seems to back up Mrs Allonby and Lady Caroline's ideas. ...read more.

The audience know the pressures well and to here her charming and elegant figure mock the rules of society would amuse them without insulting them. Not one of the group of women has any interest in social change- although at the time the play was being shown, the fourth Married Women's Property Bill was being debated, previously a wife could own nothing, not even inherited property or anything she earned herself; she was not seen as needing anything for herself, and Mrs Allonby's topical allusion reminds the audience that these women live in a changing world- rich Englishwomen would soon have some of the economic power and liberty that Hester possesses. Hester has remained quiet for all of the women's talk about marriage and the battle of the sexes. Wilde uses Hester to demonstrate the benefits of society without social classes and much less of a divide between the sexes (yet not totally equal) and Wilde's hope for a society of purpose, passion and principle. Mrs Allonby seems to have noticed Hester's silence and makes the cool remark, 'that will do her so much good!' seemingly trying to deliberately shock her and isolate her even more creating tension on stage and also adding tension to the subplot of Lord Illingworth and Mrs Allonby's wager to 'kiss the Puritan'. ...read more.

Wilde is satirising the shallow nature of the aristocracy and demonstrating the double standards for men and women- a fallen women would still be socially vilified even if she was the most excellent company in the country! Hester's isolation gives her the opportunity to observe Mrs Arbuthnot closely. The character slips is, almost ghostly with her mysterious veil, and is just as dramatic as Lord Illingworth's built up and extrovert entry. The way she arrives without being announced make sure that the audience pay close attention to her, especially as they know her to be the 'woman of no importance'. This section is key to the play as it links together almost all the themes the play is trying to convey. The battle of the sexes is played upon greatly, creating dramatic tension for the audience as they want to know how events will turn out when the men and women reunite. The arrival of Mrs Arbuthnot triggers the key action of the play, and Hester's isolation demonstrates the aristocracy's ability to ostracise anyone they do not approve of. Wilde does not bombard the audience with instructions of how they should live their lives and that they are all terrible human beings, but subtly entwines within the witty banter the faults of the current society and the audience by the end are likely to at least consider Hester's moral standing and question the way they treat people. ...read more.