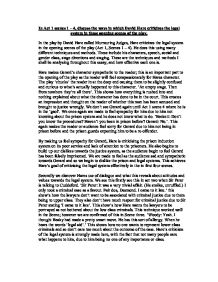 In Act 1 scenes 1 - 4, discuss the ways in which David Hare criticizes the legal system in these opening scenes of the play. In the play by David Hare called Murmuring Judges, Hare criticizes the legal system in the opening scenes of the play (Act 1, Scenes 1 - 4). He does this using many different techniques and methods. These include his characters, speech, social and gender class, stage directions and staging. These are the techniques and methods I shall be analysing throughout this essay, and how effective each one is. Hare makes Gerard's character sympathetic to the reader; this is an important part to the opening of the play as the reader will feel compassionately for Hares character. The play 'chucks' the reader in at the deep end causing them to be slightly confused and curious to what's actually happened to this character. 'An empty stage. Then from nowhere they're all there'. This shows how everything is rushed into and nothing explained about what the character has done to be in the court. This creates an impression and thought on the reader of whether this man has been accused and brought to justice wrongly. ...read more.

'Woody: Yeah. I thought Beaky had made a pretty smart move. He has this sort of allergy. When he hears the words 'legal aid'.' This shows how no one wants to represent lower class criminals and so don't care too much about the outcome of the case. Hare's criticism of the legal system is strongly made here, with the fact that not many people care what happens to him, due to him being no one of any importance or class. Hare also uses Male Chauvinism in the play to illustrate the fact of a corrupt legal system. This is shown in scene two of the play between Irina, Cuddeford and Sir Peter. Irina was hired by Sir Peter and introduced to Cuddeford in this scene where she is treated badly. This is first seen when Sir Peter does not introduce Irina to Cuddeford but leaves her standing behind him. We again see male chauvinism between Sir Peter and Cuddeford. 'Sir Peter: We regard Irina as quite a catch. Cuddeford: I see that'. This could be regarding to Irina's beauty and so be embarrassing her, however it could also be due to Irina's intellectualness, which would then be perceived as a compliment. ...read more.

This makes us feel sudden sympathy for Gerard also. This means that Hare has well communicated his opinion that prison guards do care about the prisoners, and some still feel sorry for them and show emotion. In conclusion I believe that David Hare's criticising of the legal system in act 1 scenes 1 - 4 is effective by using the points I have stated above. He has portrayed across to his audience the ideas, concepts and flaws he has seen in legal system, as well as trying to bring about change to the errors he has noticed. He creates this want of change to the legal system by bringing emotion out of the play and to the audience making them feel sympathy for the characters. He also paints a vivid image of how he believes different roles in the legal system have different classes of people; and how those different classes can become corrupt. This includes the suspects, police and lawyers through out the first four scenes. I believe he has created a strong emotive opening to the play, which will lay the foundations for other legal flaws to be detected and resolved throughout the rest of the play. ...read more.