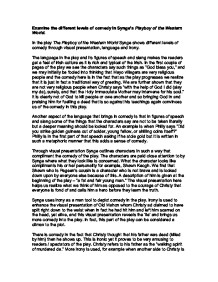 Examine the different levels of comedy in Synge's Playboy of the Western World.

Examine the different levels of comedy in Synge's Playboy of the Western World. In the play The Playboy of the Western World Synge shows different levels of comedy through visual presentation, language and irony. The language in the play and its figures of speech and slang makes the readers get a feel of Irish culture as it is rich and typical of the Irish. In the first couple of pages of the play we see the characters say such things as "God bless you," and we may initially be fooled into thinking that Mayo villagers are very religious people and the comedy here is in the fact that as the play progresses we realize that it is just in fact a traditional way of greeting. ...read more.

Philly is in the first part of that speech asking if he stole gold but it is written in such a metaphoric manner that this adds a sense of comedy. Through visual presentation Synge outlines characters in such a way that compliment the comedy of the play. The characters are paid close attention to by Synge where what they look like is concerned. What the character looks like compliments his or her personality for example, Shawn Keogh. We find that Shawn who is Pegeen's cousin is a character who is not brave and is looked down upon by everyone else because of this. A description of him is given at the beginning of the play - "a fat and fair young man." ...read more.

Christy refers to his father as the "walking spirit of murdered da." More irony is used, for example when another side to Christy is revealed by his father which is the total opposite of the perception the Mayo villagers had of Christy. Mahon refers to Christy as "the laughing joke of every woman," and "a dirty stuttering lout," which is all ironic and brings out more comedy into the play. Pegeen says that there is "a difference between a gallous story and a dirty deed," and this is ironic as it is Pegeen herself who needs to become aware of this difference. It is also ironic how all the villagers Christy had met were angry at him for lying to them but they could not see their own fault which was how they liked the sound of Christy's enchanting story, which was a twisted story indeed. ...read more.