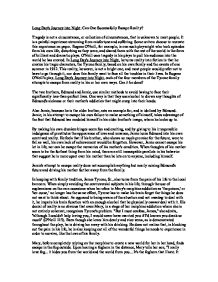 Long Day's Journey into Night: Can One Successfully Escape Reality?

Long Day's Journey into Night: Can One Successfully Escape Reality? Tragedy is not a circumstance, or collection of circumstances, that is unknown to most people. It is a painful experience stemming from misfortune and suffering. Some writers choose to recreate this experience on paper. Eugene O'Neill, for example, is one such playwright who took episodes from his own life, disturbing as they were, and shared them with the rest of the world in the form of brilliant and dramatic plays. O'Neill uses tragedy in his plays to pull his audience into the world he has created. In Long Day's Journey into Night, he turns reality into fiction in that he creates his tragic characters, the Tyrone family, based on his own family and the events of one summer in 1912. This reality, however, is not a bright one, and most people would prefer not to have to go through it, nor does this family want to face all the troubles in their lives. In Eugene O'Neill's play, Long Day's Journey into Night, each of the four members of the Tyrone family attempts to escape from reality in his or her own ways. Can it be done? The two brothers, Edmund and Jamie, use similar methods to avoid having to face their significantly less-than-perfect lives. One way is that they use alcohol to drown any thoughts of Edmund's sickness or their mother's addiction that might creep into their heads. ...read more.

She suddenly develops a detached and impersonal manner during a conversation with Edmund and Jamie, a characteristic behavior of her return to the drug. Mary tries to rationalize her situation and that of her family when she says, "None of us can help the things life has done to us" (O'Neill 61). In telling herself that there is nothing humanly possible that can be done to change her life, that it all rests on fate, she is refusing to accept the fact that she might be able to help herself and her family in any way. Mary takes the easy way out, which turns out to be even more difficult than she expected. Her reliance on the drug to save her from the guilt she feels for her family's sufferings is a refusal to take responsibility for her family. She feels guilty about the fact that her family's lives seem to have culminated in despair and turns to the morphine to escape. Not being in her right mind, she is no longer able to perform her duties as a wife and mother. More guilt arises from her lack of responsibility, which causes her to rely on the morphine even more, which creates even more guilt. She is overwhelmed by the vicious circle she is trapped in. The torment she feels at this moment proves that she could not have possibly escaped reality because the real world still has an impact on her and how she lives and feels. ...read more.

Even when the characters are convinced that they have succeeded in escaping their lives, they are only fooling themselves "...because the characters cannot get away from themselves; even when talking about other things, they keep thinking about their own fate" (Tornqvist 52). They constantly wonder things like, "What if these problems never go away?" and, "What will happen to us?" Real life and its problems are always on their minds and there is no way to block out the real world. However, a life without obstacles and challenges really isn't much of a life at all. Therefore, it seems as though the family's entire lives center around trying not to live. Where they "live," or rather, where their address is located, is a perfect example of this. They spend their days in a summer home, not a real house. They've never had a real house because James has to travel so much, being an actor. A summer home is meant for vacation, in other words, escape from the real world for a little while. Only the Tyrone's aren't there for a little while, this is where they want to exist for as long as possible. While it is possible, and even healthy, to leave life behind for a short time, one must go back eventually. As this play illustrates, ignoring issues in one's life can lead to greater problems and conflicts with loved ones. ...read more.