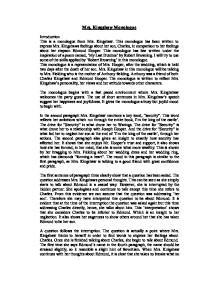 Mrs. Kingshaw Monologue Introduction This is a monologue from Mrs. Kingshaw. This monologue has been written to express Mrs. Kingshaws feelings about her son, Charles, in comparison to her feelings about her stepson Edmund Hooper. This monologue has bee written under the inspiration of a poem named, 'My Last Dutches' by Robert Browning. I will try to use some of the skills applied by 'Robert Browning' in this monologue. This monologue is a representation of Mrs. Hooper, after the wedding, which is held two days after the death of her son. Mrs. Kingshaw in this monologue will be talking to Mrs. Fielding who is the mother of Anthony fielding. Anthony was a friend of both Charles Kingshaw and Edmund Hooper. The monologue is written to reflect Mrs. Kingshaw's personality, her views and her attitude towards other characters. The monologue begins with a fast paced environment where Mrs. Kinghshaw welcomes the party guests. The use of short sentences in Mrs. Kingshaw's speech suggest her happiness and joyfulness. It gives the monologue a busy but joyful mood to begin with. In the second paragraph Mrs. Kingshaw mentions a key word, "security". This word reflects her ambitions which run through the entire book, I'm the king of the castle'. The drive for "Security" is what drove her to Warings. The drive for "Security" is what drove her to a relationship with Joseph Hooper. And the drive for "Security" is what led her to neglect her son at the end of 'I'm the king of the castle', through her actions. ...read more.

She also repeats words such as "no" to emphasise her disbelieve in Charles death to be a suicide. Short and sharp sentences, which are mainly one worded show Mrs. Kingshaws fustration and anger towards the subject which is being discussed in the penultimate paragraph. There is one word which sums up all of Mrs. Kingshaws intentions and makes the penultimate paragraph significant. This word is "my". It suggests possession, and favouritism. In anger the word suggests protection of the person to whom it refers. There fore in this paragraph shows Mrs. Kingshaws frustration, we can also assume that this frustration may be caused by her guilty feelings towards Charles. The final paragraph can be referred to as a barked comment. This is because Mrs. Kingshaw is moving away from Mrs. Fielding. She also expresses to Mrs. Fielding to stay away from her. This shows that she is ideally angry and frustrated towards Mrs. Fielding. This shows her character to be self-conscious and a character which can suppress any thing, even the guilt for involvement with her own sons suicide, by making herself believe every thing was for the best. Introduction to the setting It was a week after his death. there was a quiet funeral the two days after he had died, and the wedding was postponed. It was obvious to his mother that he had slipped whilst playing in the river. ...read more.

It was however led by my son Charles. So it is wiser to blame him. As for the violence, Charles is afraid o-o-of the dark, a-and if he feels scared and lonely he may get slightly v-violent or even become aggressive over any one in the surroundings. A-and Edmund may have been just a little too close to Charles at that time. Now, now, Mrs. Fielding, I think Anthony may have, now what the words, oh-yes, Anthony may have miss-heard Charles. Charles would never say such a thing about Edmund, after all they were best friends. Edmund would never lead Charles t-t-to what your suggesting. Well. No. Outrageous. Certainly not. I mean... Preposterous. It just can't be like that. And furthermore it was never, nor will it ever be a suicide, it was a tragic accident. Perhaps there may have been little quarrels between the two children, but you cannot assume that Charles did what your suggesting because of Edmund. I just cannot accept your negative approach towards my Edmund. Mrs. Fielding, Anthony is wrong about Edmund. I shall not tolerate such absentminded comments about my child Edmund ever again. Never in my life have I heard such nonsense. No, no, never. Mrs. Fielding as we are good friends and we both wish to continue our friendship, therefore I would advise you to drop any further questions on the subject! Yes, dear. Coming. I must really dash, Mrs. Fielding, hope to see you soon, but not too soon. Good day to you! ...read more.