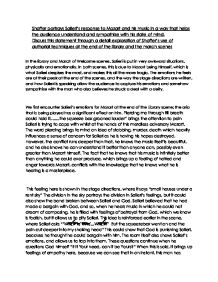 Shaffer portrays Salieris response to Mozart and his music in a way that helps the audience understand and sympathize with his state of mind. Discuss this statement through a detail exploration of Shaffers use of authorial techniques at th

Shaffer portrays Salieri's response to Mozart and his music in a way that helps the audience understand and sympathize with his state of mind. Discuss this statement through a detail exploration of Shaffer's use of authorial techniques at the end of the library and the march scenes In the library and March of Welcome scenes, Salieri is put in very awkward situations, physically and emotionally. In both scenes, this is due to Mozart being himself, which is what Salieri despises the most, and makes this all the more tragic. The emotions he feels are at their peak at the end of the scenes, and the way the stage directions are written, and how Salieri is speaking allow the audience to capture his emotions and somehow sympathize with the man who also believes he struck a deal with a deity. We first encounter Salieri's emotions for Mozart at the end of the Library scene; the aria that is being played has a significant effect on him. ...read more.

These questions continue when he questions God himself "It it Your need, can it be Yours?" When this is said, it brings up feelings of empathy here, because we can see that in an instant, this man has been torn of everything he held dear to him, and we know these questions cannot be answered, but he cannot help but not say them. "The light flickered in the room" could signify the fact that Mozart's music is so powerful it is changing Salieri's perception on reality at this time, showing deep psychological damage. But it could also mean that there is a 'wind of change' in the form of Mozart being shown as the better composer. However, it could also symbolize Salieri's hope for the future being hampered, and even coming close to being extinguished. The way that Salieri is speaking in this scene shows his emotion to the audience very noticeably. There is a lot of enjambment, which shows Salieri's continuous flow and unceasing variations of emotions. ...read more.

After Mozart has finished playing, he "marches happily off stage" which just adds more hatred to Salieri, as he believes Mozart is mocking him, where in reality Mozart is oblivious to the internal damage he is causing Salieri. The way the stage directions at the end of this scene are written is similar to how Salieri speaks in the Library scene, full of enjambment. This shows the building tension in Salieri as well as the building joy in Mozart, this contrast of emotion is interesting, as it shows how oblivious Mozart is to Salieri's pain, and makes the audience even more sympathetic. Overall, an extensive use of authorial techniques Shaffer uses makes the reader sympathize with Salieri in various ways, sometimes the audience is inclined to feel pity, sometimes empathy, but it also puts feelings towards Mozart, usually annoyance and anger. These emotions that the audience feel are important, because it helps the audience relate to the characters more, and make the whole production a much fuller experience. ...read more.