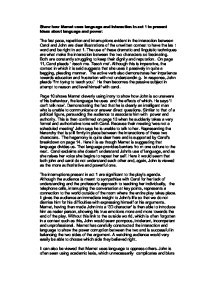 Show how Mamet uses language and interaction in act 1 to present ideas about language and power: The fast pace, repetition and interruptions evident in the interaction between Carol and John are clear illustrations of the unwritten contest to have the last word and be right in act 1. The use of these dramatic and linguistic techniques are what make the interaction between the two characters so fascinating. Both are constantly struggling to keep their dignity and reputation. On page 11, Carol pleads ' teach me. Teach me'. Although this is imperative, the context in which it is said suggests that she uses it passively in quite a begging, pleading manner. The active verb also demonstrates her impatience towards education and frustration with not understanding. In response, John pleads 'I'm trying to teach you.' He then becomes the passive subject in attempt to reason and level himself with carol. ...read more.

Carol exclaims she doesn't understand John's use of language, and as she raises her voice she begins to repeat her self. Here it would seem that both john and carol do not understand each other and, again, John is viewed as the more authoritative and powerful one. The interruptions present in act 1 are significant to the play's agenda. Although the audience is meant to sympathise with Carol for her lack of understanding and the professor's approach to teaching her individually, the telephone calls, interrupting the conversation at key points, represents a connection to the world outside of the room where the entire play takes place. It gives the audience an immediate insight to John's life so that we do not dismiss him for his difficulties with expressing himself or his arguments. Mamet, having then made John into a '3D character' is then able to introduce him as realer person, showing his true emotions more and more towards the end of the play. ...read more.

Once John realises his errors in the use of his language and changes to lower himself to Carol's level, she is outraged and files a complaint. When a teacher of professor does not speak with authority, Mamet has shown us that they will be complained about because it's not professional conduct. And although it may seem as though universities are in place to test the students; professors and lecturers are actually more often put to the test. It is this message that I believe Mamet conveys in act 1 through his use of ringing telephones, irony and symbolised hegemony. That because John will be penalised either way for his behaviour, whether it be obscured academic language, or inappropriate reasoning with students, he has no way out of his place in the hierarchy. And that because the audience will see this, the insight into his life allows us to pity and appreciate him and feel the awkwardness the educational society creates for everyone inside it, both the bottom and the top of the ladder. ...read more.